The manu taratahi (kite) which inspired a framework for Te Paetahi Akoranga Bachelor of Teaching at Wintec.

An early childhood teaching degree at Wintec is grounded in te ao Māori, with a framework represented by a traditional Māori children’s kite.  Te Paetahi Akoranga Bachelor of Teaching is a truly bicultural degree that will enable childcare professionals to work in any setting.

Te Paetahi Akoranga is the first Early Childhood Education (ECE) degree to be approved under the Teaching Council of Aotearoa new approval requirements for Institutes of Technology and Polytechnics (ITPs).

In 2018, the Teaching Council of Aotearoa New Zealand sent a directive to tertiary providers to revise their Early Childhood programmes and relaunch them for 2022 and this included responding to te ao Māori (the Māori worldview). The team from Wintec Centre for Education and Foundation Pathways didn’t hesitate, they started their journey.

The journey to develop Te Paetahi Akoranga has brought everyone along and continues to do so. Māori and non-Māori, fluent and non-fluent, everyone involved is developing and sharing an ongoing kōrero that is breaking new ground but rooted in mātauranga Māori or Māori knowledge.

Wintec Academic Leader, Tracey Hooker (Whaea Tracey) says that as the development progressed, the team quickly realised  they weren’t ‘refreshing’ the current programme - they were writing something completely new.

“We met with local iwi  at the Waikato-Tainui Endowed College and said, 'We are starting again with nothing’, and asked in their view, where we needed to start.

“They laid down a challenge and told us what they wanted. We went back to Wintec to work on the framework, and realised we needed something to pin it to.”

Wintec Kaiako {teacher], Shilo Bluett (Whaea Shilo)  presented the team with a manu taratahi, a traditional Māori children’s kite that had been made by a former colleague, Whaea Mere Smith, who re-joined the team in the final writing and accreditation stage.

Sadly, Whaea Mere passed away early in 2020 before the programme came to fruition but the manu taratahi she made, came to represent the framework of the new degree. They developed meaning and structure from its intricately woven panels and bindings, to the tail feathers.

The ability to fly related to tauira/learners who would take part.

“For kaimahi [staff] this degree represents a manu taratahi. It is a kite for children that symbolises the past, the present and the future,” Whaea Shilo says. 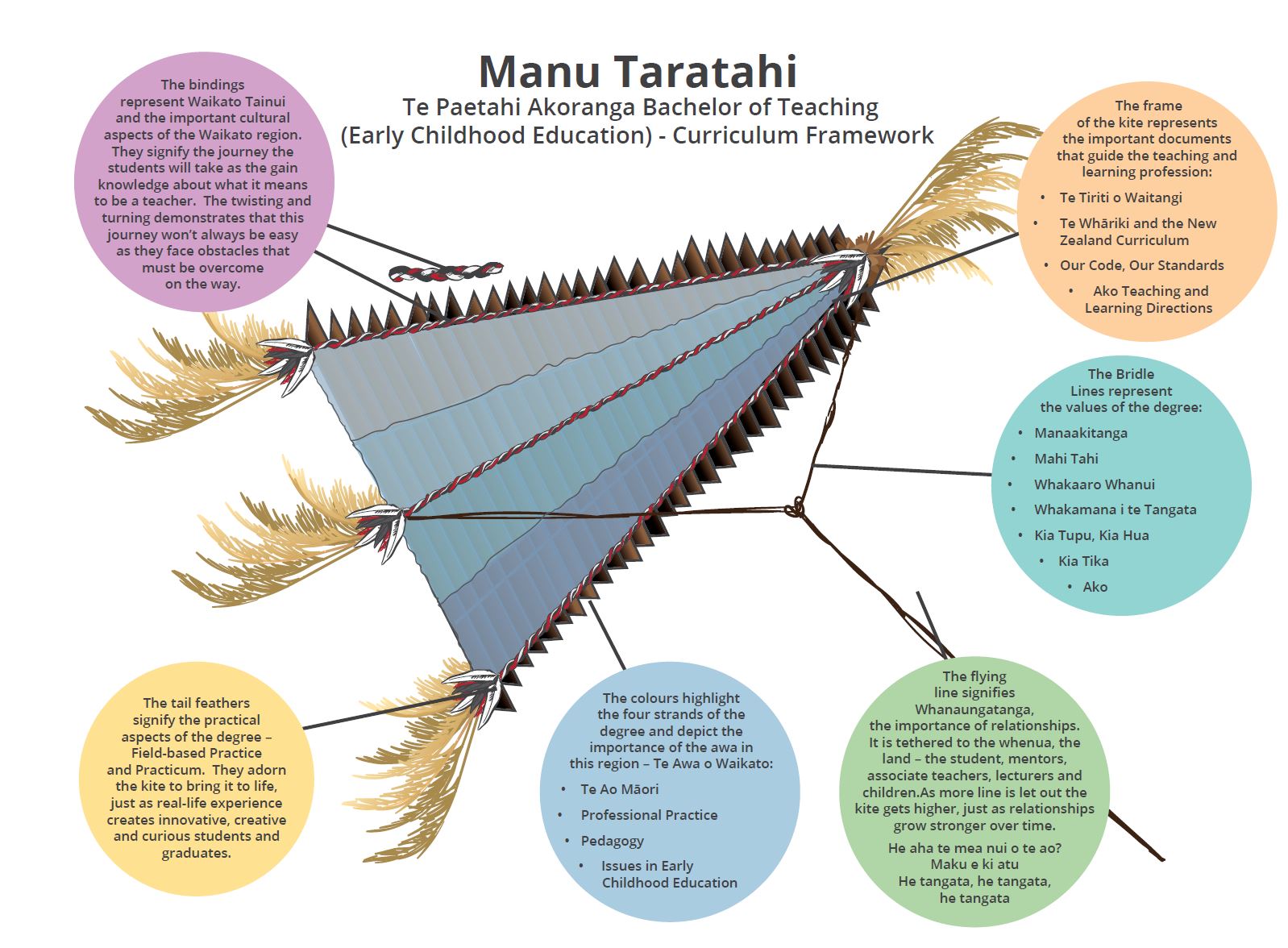 “We started with te ao Māori and we flipped our whole pedagogy on teaching in response to iwi.

“The early childhood teaching sector is changing, but our new degree is responding to these shifts because of the way it is formed. We shed what we don’t need, and we are reconstructing it as we move along.”

Whaea Karen Bishop Puhi (Waikato-Tainui) has been there for the journey, first as a graduate of the existing degree and now as a kaiako and contributing developer to the new degree.

“Everything we do is through a te ao Māori lens and our tauira Māori, Pacific and Pākehā are embracing this way of learning.

“Because of the way it is written, and the way it is woven to embrace equity, there has been a shift from what was happening in the past. Our tauira Māori and Pacific are now taking a lead,” she says with pride.

“This is because Te Paetahi Akoranga embraces equity, whakatika [to correct], manaakitanga [treating others as equal or greater] and whakawhanaungatanga [making connections and relating to people].”

Whaea Shilo says it took two full years, for six dedicated and passionate kaiako to weave the framing of the degree together.

“Whaea Tracey was clear as an academic leader that we all had to be involved. There was lots of discourse. We threw everything in and everything out. We went into it knowing it would be difficult and it was hard work but truly rewarding,” she says.

They worked in consultation with Wintec Kaumātua Tame Pokaia, and kaimahi Māori at Wintec to get it right. Not just for Māori but so this way of learning would embrace and include all cultures.

“We’ve removed the western aspect of competition. We acknowledge that everyone comes with their own kete of knowledge, their unique qualities and everyone contributes. We create space for them, and we’ve written assessments where there is scope for our tauira to share learning in ways that make sense for them.”

She shares an example where year one tauira have decided that as part of their learning, they will make a quilt. It will be a collaborative design, woven from their learning and they will send it to an organisation that makes a difference to children’s lives.

In 2022 the first cohort of Te Paetahi Akoranga learners will be in their second year so the teaching team are adopting a tuakana/teina approach where the more experienced year 2 tauira will guide and support the year 1 tauira.

“We want tauira to come in with their knowledge, their gifts and we want them to be able to fly, to navigate what their teaching and learning space would look like. This whole process has been unfolding for us and as their whaea,  we know and like that it is different to a more traditional lecture-based classroom.

“What makes this degree special is that it strives to be authentically bicultural, and  it responds to everyone.”

“People are given the tools to use but not the toolbox. It’s like having the poi, but not the whakapapa or the tikanga around how you would use the poi and what that means,” she says.

“We may not all be immersed in te ao Māori, but we consider it first.”

Whaea Shilo explains, “we start with te ao Māori then we layer te ao Pākehā onto that”.

“Our tauira already know about te ao Pākehā, they grew up with it, but many don’t know te ao Māori. We also adopt Pacific cultural learning, for example, this year, we celebrated Cook Island Language Week and we’ve been learning about the Dawn Raids – which helps us understand the complexity of intercultural relations,” she says.

“We spend so much time in a whakawhanaungatanga space, we are in a position where we can talk about anything including intricate topics in professional ways. We are seeking to address racism, it’s about whakatika and putting things right.”

“We say to tauira, this is your karakia and waiata written about you and for you, and now some of our quieter non-Māori tauira are leading. We start from te ao Māori every day and this is what this programme is achieving.”

The manu taratahi sits alongside Te Paetahi Akoranga as a reminder that the degree, the tauira and kaiako are on a journey.  One that will remain connected to its whakapapa but will fly according to its own unique pathway.

This story is part of a series demonstrating how cultural change is making a major difference to learners, staff, employers and the wider community.

Ensuring education responds to the needs of Māori, Pacific and all learners is a focus for  Te Pūkenga – New Zealand Institute of Skills and Technology.  As a subsidiary of Te Pūkenga, Wintec’s Tōia Mai framework aligns closely with this.

During the development of the degree, Whaea Karen responded with a waiata, “Te Manu Taratahi”, she said “it came to me one day”.

When we roll as a whānau we move as one

How motherhood inspired Jessie to follow her teaching dreams