From Hamilton to Bahrain – young chef shares his secrets

From studying cookery at Wintec in Hamilton to working for the royal family as Chef de Cuisine on the island of Bahrain in the Middle East, the world is Joel Miller’s oyster.

Joel Miller proves no dream is too big for an aspiring chef from Hamilton, New Zealand. He now cooks for the royal family in Bahrain.

For as long as he can remember, Joel always wanted to be a chef. Apart from lunchtime, his food tech class was the only thing keeping him at high school. Then in 2013 he met internationally recognised Michelin star chef Josh Emett at his restaurant, Rātā in Queenstown.

“I was already a huge fan and couldn’t wait to get a photo for my profile picture. But I also wanted to ask what advice he had for an aspiring chef, and he said, ‘the best advice I can give you is to study cookery at Wintec, my old stomping ground in Hamilton, and then come and talk to me when you’re done’.

During those two years Joel learnt many valuable skills that prepared him for the workplace.

He was also presented with opportunities to further his learning, including competing at Waikato Culinary Fare, and the WorldSkills competition.

“To me there is nothing quite like competing. You can work in any kitchen, but at the end of the day the pressure you compete in, you either thrive in it or you just don’t,” he says.

Joel finished his study at the end of 2015 as a qualified chef and graduated with Excellence from Wintec in 2016, along with the London City and Guilds Medal of Excellence Award in Cookery. He was 18-years-old and ready to take on the world.

Conveniently, Madam Woo by Josh Emett had just announced they were opening in Hamilton and Joel knew he had to work there. That photo Joel took back in 2013 came in handy for the front of his CV and helped land his first dream job at the new restaurant.

Joel explains: “My time at Madam Woo was amazing. I was fortunate to have trained under Jane Leong, Executive Chef of Madam Woo. Jane’s family’s recipes and flavours were behind this new restaurant. I also got to work side by side with Josh in the kitchen, a person I admired. I felt a great sense of accomplishment to get to this stage, but why stop there I thought?”

Life’s opportunities can often be about who you know, and Joel’s former Wintec tutor, Amy Opperman was the link between an Executive Chef in Bahrain and the opportunity of a lifetime.

“There were many supportive tutors at Wintec who helped me hone my skills and develop my passion, but Amy continued to support and inspire me after I graduated. She was the one who helped make it all happen.

“She knew I had potential and a bright future ahead of me with a passion for travel and an urge to work overseas. So, she approached me with a job opportunity as a chef for the royal family in Bahrain.

“The first thought I had was, where the heck is Bahrain? I literally had to Google the country I now live in. The ball started rolling and after a few skype interviews and a couple of months later, I packed my life into 30kg and away I went on a one-way ticket to the other side of the world.” 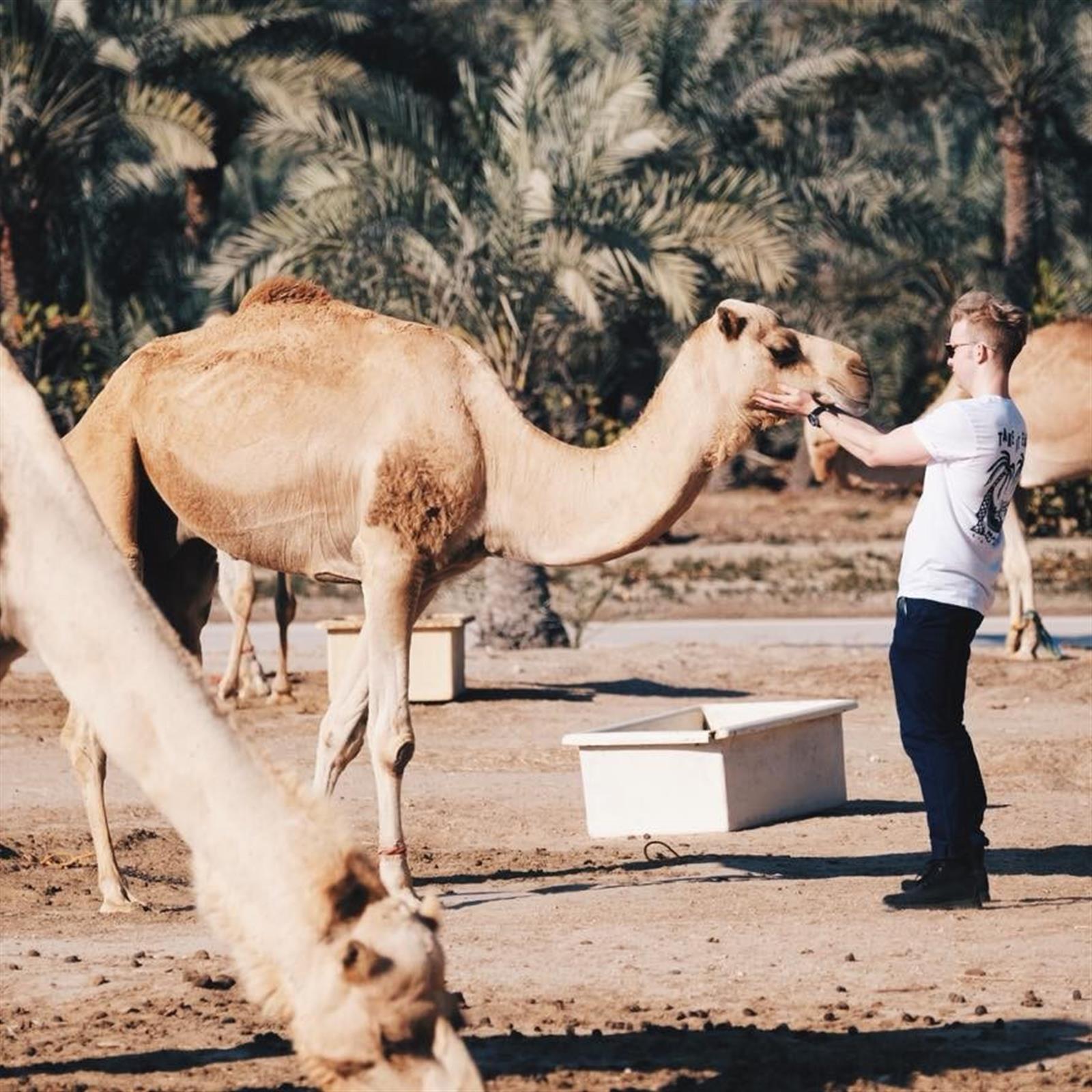 Joel in his backyard at a Bahrain camel farm

Moving to a country he had never heard of didn’t faze Joel though.

“I wouldn’t say I was nervous about moving to a country I knew nothing about. I always try and turn whatever nerves I have into excitement for the opportunity.”

He said arriving in Bahrain was a major culture shock: “The biggest challenge was seeing sand everywhere – there wasn’t a piece of grass in sight – along with the language barrier. Everyone speaks Arabic and I was an English-speaking Kiwi.

“But when I arrived at the Palace, where I now work, it was just breath-taking! We have eight kitchens, 60 chefs, and a total of 400 staff on the grounds. I work as one of the four exclusive chefs in the International Kitchen.”

Due to privacy and contractual reasons, Joel can’t go into much more detail, but what he can say is: “I’m very lucky to work in a place that doesn't have a budget, it’s a chef's dream and certainly not the norm. But I do have to work six days a week and very long hours.”

He is required to cook a wide variety of food and cuisines, including Indian, Arabic, Egyptian, Lebanese, French, Italian, and the list goes on. This is helping develop his craft.

During his first year at the Palace, one of Joel’s adapted recipes featured in The New Zealand Chef: Fourth Edition, and he has since been able to travel solo to London, to personally cook for some of the royal family.

“This is one of the reasons that attracted me to accepting the job. I want to see as much of the world as possible, mainly because I want to eat my way around the world.”

Joel has just started his third year in Bahrain and says he has certainly grown as a person and chef since he arrived as an eager 19-year-old.

“I was forced to grow up instantly. I went from living in New Zealand with my family, where I hadn’t even experienced flatting before, to setting up my own apartment in a foreign country.

“Living overseas, away from friends and family, can be very lonely at times, but you just have to think about your future and the big picture and push through it,” says Joel.

When asked what advice he would give to his younger self, Joel said: “I would tell him, you’re not going to get anywhere in life unless you put in the hard yards now. Fortunately, I think I did just that, and that hard work has got me to where I am today.

“I was also given some great advice from a top chef, and that was ‘to save your money and eat at as many high-end places as you can, as this will help train your palate’. By putting this into practice, I have been fortunate enough to travel, dine at, and meet some of the world’s top chefs.

“Learn from creative people. Be a sponge,” says Joel. 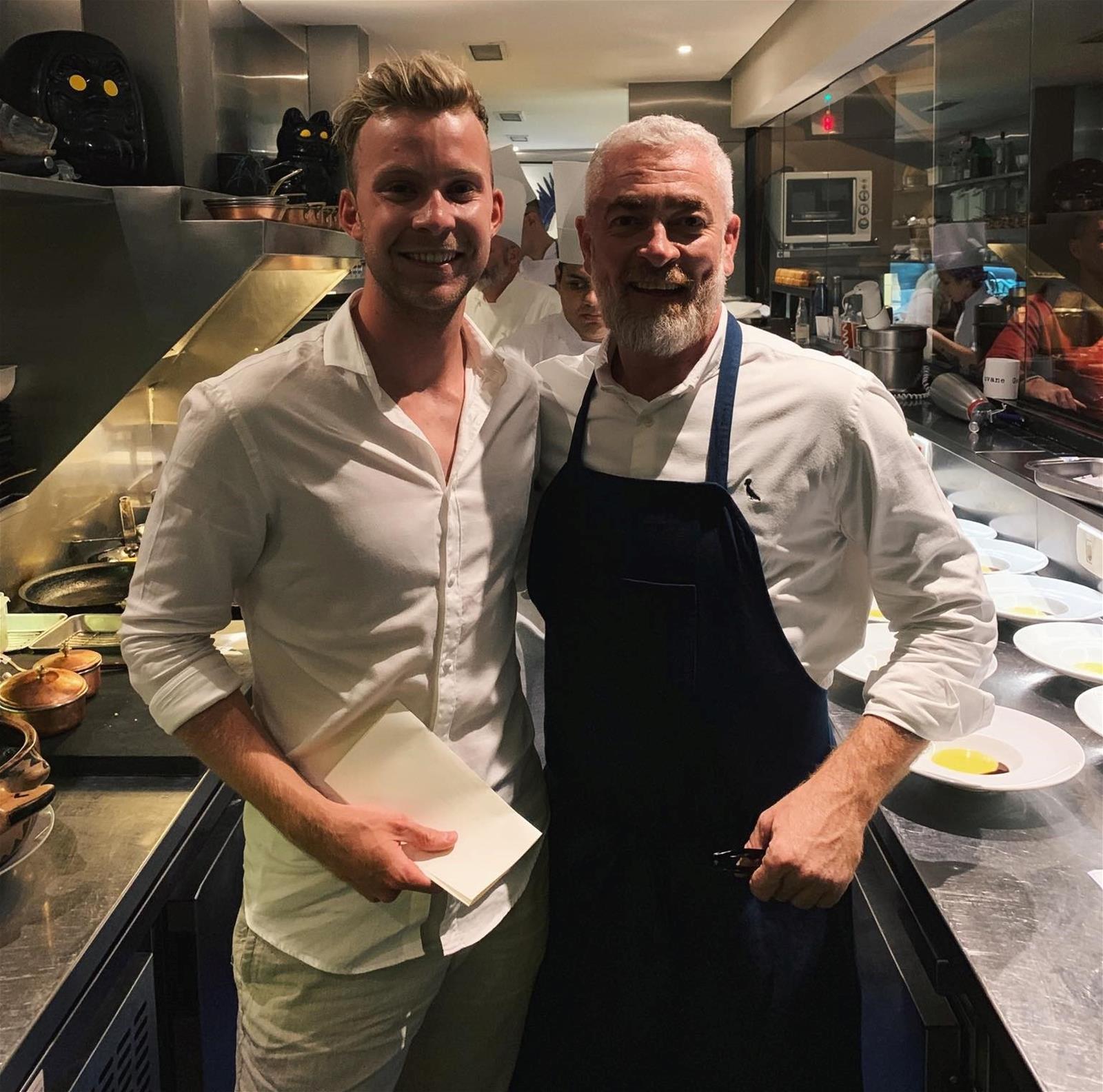 Watch this video to hear more about Joel's journey.

Find out more about studying cookery at Wintec here.

Read more:
Working together brings opportunity for Māori and Pasifika students
Wintec's kitchens paying it back to the community
Budding chefs handle the heat