What do science, art and the colour purple have in common? According to Vicki Kerr, Postgraduate Theory Supervisor at the School of Media Arts, Wintec – quite a lot actually.

Vicki Kerr is one of several artists creating artworks about climate change for the Track Zero funded project ‘What if Climate Change was Purple?’, the brainchild of Professor James Renwick,  meteorologist at Victoria University of Wellington.

The concept behind the name speaks to the theory that if people could see how C02 emissions change and detrimentally affect the air, if these carbon dioxide emissions were purple for instance, then people would be more driven to do something about it.

“The idea for the whole project is to take the science and to make it purple. To get it in front of our eyes in a way we can all see, that would give us all new perspective and help to stop climate change in its tracks.”

Kerr’s contribution to the project, Airways, is a collaboration between herself and scientists Chris Batterton and Micah Livesay.

Airways aims to draw attention to “the impact of the exponential growth of global air travel upon the environment and other airborne species, most specifically birds.

“Birds have a hazardous relationship with aircraft. Bird strikes cause damage to aircrafts and can cause accidents, and obviously birds die during these events.

“Additionally, no other human activity emits more carbon dioxide than flying. It’s got a massively detrimental impact on the earth.”

Kerr, who has been a practising artist and educator for many years, was once an air traffic control officer. Her doctoral thesis investigated moments of breakdown in the air traffic system that were caused by nature. The artwork continues to investigate elements of these themes.

“Airways is a bit of an extension of some of my PhD work. The natural world has a way of preventing us from flying, whether it’s ash cloud from volcanoes, the Erebus crash, and now COVID-19.”

After the scientists and artists were selected from the pool of applicants, Renwick held a workshop in Wellington for those involved, as a way for them to meet and find collaboration partners.

“I started talking to Chris Batterton, a mathematician who is quite involved with art and wanted to make something about frequencies and waves in a rather unorthodox way.”

“His expertise is mathematical modelling and I was really interested in the exponential growth of air travel and its impact on airborne species, so it seemed like a good fit.

“I also met Micah Livesay, a sound engineer who was really enthusiastic about the project so the three of us joined forces to create a multimedia art installation.”

The project consists of three different movements. Each movement is an animated video that combines audio and visual elements interpreted from data that was recorded from a variety of different New Zealand airports over a period of 18 months. Each movement will be projected onto a different screen in an installation, with the desired result being an immersive experience for the viewer. 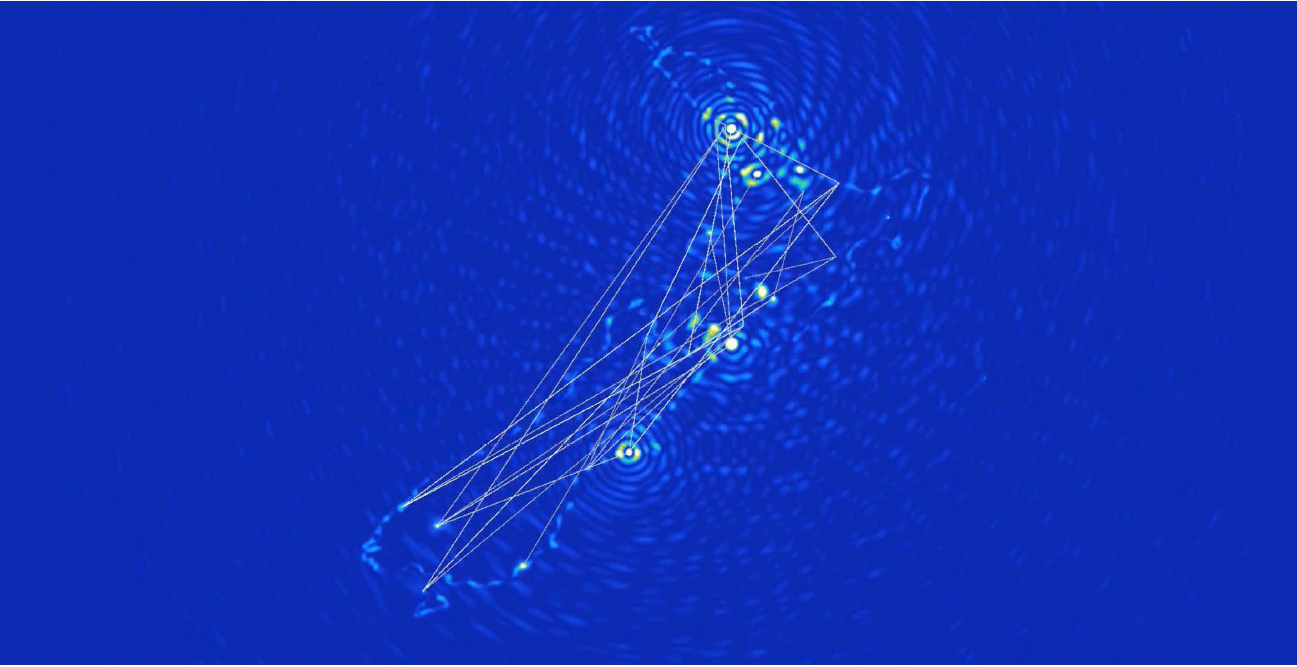 A visual map of audio data in the location of the New Zealand airports where the data was taken from.

Over this period, the data tracked the movements of aircraft and also picked up the voices of air traffic control officers and bird calls. These sounds are meshed together to create the audio that is overlaid with the visuals.

“I wanted to realise the territorialisation of space in an audible way. There’s a frenetic activity in terms of air traffic controllers, and I wanted to see how that could be synthesised with bird calls.”

In the final few months of this period too, COVID-19's presence in New Zealand and the world intensified, which added another unexpected but fitting dimension to the artwork as the data picked up an obvious lessening of aircraft movement, and a proliferation of bird noises.

“It was an opportunity for humans to experience a sense of nature that we’d never been able to before. We could suddenly hear birds in the sky, all around us. It offered a sensory experience through immobility. That limitation to movement gave a unique opportunity.”

Another element that Kerr wanted to explore through Airways was the colonisation of airspace: how humans have in many instances completely overtaken the skies with little care as to how it affects non-human species that need that space to navigate.

“In the third and final movement of the artwork, we wanted to recognise this colonisation through the use of taonga pūoro. All taonga pūoro utilise human breath and air. The instrument poi awhiowhio was traditionally used to call birdlife, and is the perfect symbol for a nation gone quiet, allowing a moment of self-reflection. ”

The final result when viewing all three movements together is an arresting yet stark realisation of the huge impact that humans have on the planet and the other species we share this planet with.

For Kerr, Airways acts as a reminder of “the sheer condition of ‘breath’ gifted to us by the planet’s own respiratory system.”

The next stage for the installation is exhibition. While the details have not yet been finalised, Kerr has already envisaged an immersive installation experience where each movement is projected on a different screen that surrounds the viewer. She also hopes to install a motion sensor that activates the audio components depending on how people are moving about in the space.

Kerr’s final thoughts about the artwork and the potential impact of the What if Climate Change was Purple? project are hopeful and uplifting.

“There’s such a need to communicate and be really transparent about science, how we communicate these complex concepts.

“Artists and scientists work really well together. When it comes to climate change, anything that is mutually collaborative, that brings together different disciplines that can help communicate this very real crisis is going to help.

“Art can get that message across in ways that connect to the human imaginary.”

One man, one camera and the liberation of limitation
Researcher is taking taonga puoro to new places at Wintec
Student sculpts fluid glass into exciting forms at Ramp Gallery