Researcher is taking taonga puoro to new places at Wintec

Leading tohunga of taonga puoro, Horomona Horo has joined Wintec School of Media Arts as a researcher and teacher, and he wants students to bravely take traditional Māori music to new places.

Having a taonga puoro (singing treasures) researcher in a teaching position is a first for tertiary education in Aotearoa New Zealand.

For Horo, this appointment as a researcher and teacher is unique and very close to his heart.

“Being a taonga puoro researcher connected to Wintec is very special. This role is a first in Aotearoa and it opens many fields. While taonga puoro is grounded in te ao Māori, this doesn’t mean it can’t be fused with modern technology and I want to encourage students to be brave and take it to new places.”

Horo says there is a sensitivity to traditional Māori music because of the spirituality and connection it has, but this doesn’t mean it shouldn’t evolve into new forms of expression.

“I want to see people break through the stigma. When you are adept in your special field you can connect and evolve music. I want students to explore and go outside the norms with traditional instruments infusing them into different genres like techno, rock and even heavy metal.”

He cites an example of meeting heavy metal band, Alien Weaponry whose songs are in te reo Māori, and talking to them about the potential for taonga puoro within their sound. 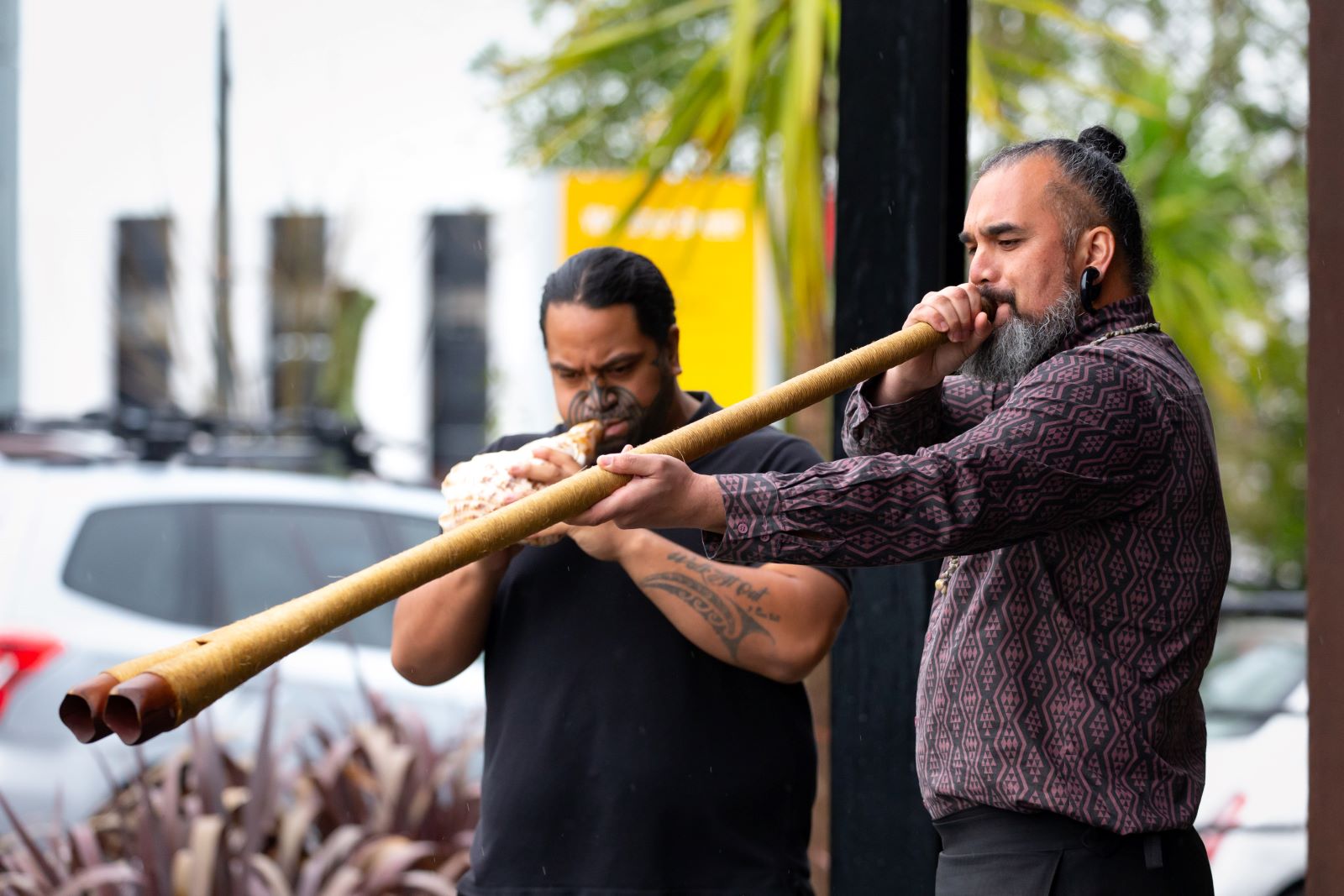 Horo was mentored by tohunga (experts) of taonga puoro, Dr Hirini Melbourne and Richard Nunns and he continues their vision for the renaissance of traditional Māori musical instruments.

As a composer, practitioner and cross-genre collaborator, Horo is no stranger to taking traditional music into new places, fusing the traditional instruments of the Māori taonga puoro within a diverse range of cultural, musical and educational forms.

He regularly performs with Hamilton composer, performer and Wintec researcher, Dr Jeremy Mayall combining the sounds of taonga puoro with electronic soundscapes. This collaboration has included performances in Boston and New York, a tour and exhibitions in China, as well as commissions for the New Zealand Symphony Orchestra, NZ Trio, WOMAD, The Meteor Theatre, and MESH Sculpture Hamilton.

David Sidwell heads the music department at Wintec School of Media Arts and says it was wise to bring Horo on board as a researcher.

“Horomona is a researcher in his own right and he has been collaborating with other researchers here at Wintec. Now we have formally engaged him, his Māori world view and his extensive knowledge of taonga puoro, along with his natural generosity is going to be of great benefit to our music students.

This isn’t Horo’s only role at Wintec. He has two other part-time roles. As kaiāwhina he supports and mentors students, and as an events coordinator at Te Kōpū Mānia o Kirikiriroa Marae on the Wintec Hamilton City campus, his schedule is getting fuller by the day.

Horo says it’s part of the process of creating to challenge stereotypes and “New Zealanders are known for their natural ingenuity to go outside the box in many fields, whether it’s sport, science, arts, politics, leadership  - it’s ok to question and to be brave”.

“No one ever thought to take on J.R. R. Tolkien, but Peter Jackson did and many of us will remember Jonah Lomu as the player who made rugby a super sport.

“Once we step outside the boundaries of the unknown, that’s where the fun begins.”