New film depicts nuclear issues as a problem for humanity

Waikato Institute of Technology (Wintec) academic and filmmaker John Mandelberg is about to release a new film, Totem & Ore, a story about the past and the present, that connects nuclear issues in Australia and Japan.

Totem & Ore gives context to the effects of the atomic bomb on the population of Hiroshima in 1945 up until today, comparing those atomic survivors with indigenous communities in Australia who were affected by 1950’s British nuclear testing of 12 atomic weapons and 500 various minor trials on Aboriginal land.

It has been an epic, yet rewarding journey for Mandelberg who is making plans to show the film in Australia and New Zealand after its world premiere at the Hiroshima International Film Festival on 24 November this year.

“In 2016, I was working across Hiroshima, Melbourne, Sydney and central Australia in between teaching at Wintec in New Zealand.”

In 1995, Mandelberg released a film on the double life of writer B. Wongar who became the inspiration for Totem & Ore.

“I was fascinated by his story. He was from Eastern Europe and wrote fiction like an Aboriginal about the clash between white people and Aborigines. His first three novels became known as ‘the nuclear trilogy’ and they told a grim story about the testing that took place in the 1950s. He showed that uranium dislocated communities where testing took place.”

“Wongar published a non-fiction book called Totem & Ore where he wrote about the tragedy of uranium exploration and Britain nuclear testing against Aboriginal people.”

In 2014 Mandelberg made a pilot based on Wongar’s book to help fund the film. Funding for Totem & Ore came in part from Wongar, through Mandelberg’ s own resources and a research grant sourced through Wintec.

“Totem & Ore is not a replication of Wongar’s book. I needed to get a context for the Australian story and that was the first nuclear weapon to be dropped on a community.

“I wanted to make a film to tell the story about the past and the present. The events at Hiroshima and more recently, Fukushima are good bookends for the nuclear story.” 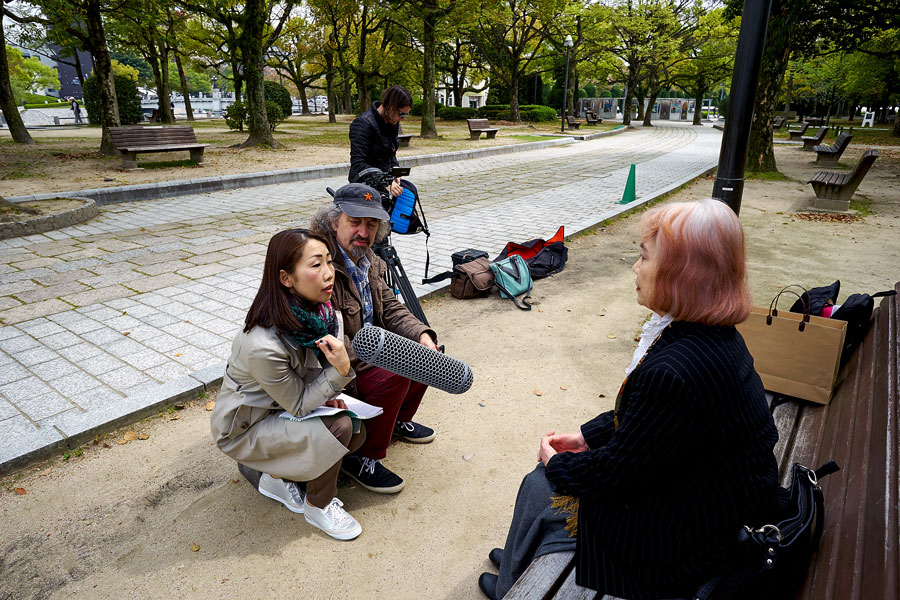 The film starts in 1945 with the Hiroshima bombing and ends with the Fukushima nuclear meltdown in 2011. Mandelberg says the Americans shut down Japanese writing about the atomic bomb after the second world war.

“Truman was convinced this was the way to save the world and stop the war, but the Japanese were making contact to surrender.”

“In 1945, the Hiroshima bomb was detonated above a hospital and in nine minutes 90,000 people died. For me, I felt this was a story that needed to be told again and again.

“The last bomb was dropped on Nagasaki in 1945 but there are nuclear tests going on all the time. In April 2016, when we were researching this film, it had only been 90 days since the last test.”

“So many films on nuclear issues have the quality of hitting the viewer over the head with the imperatives and brutalities of the history. This work really does a great job of presenting everyone as human beings living lives of integrity and exploring the history and legacy of these events.”

About John Mandelberg
For more than 30 years, John Mandelberg worked in Australian film and television. He taught at the National Film School in Australia before moving to Hamilton in 2003, to teach Moving Image at Wintec’s School of Media Arts, where he continues to teach across all multiple degrees.

John has written academic articles, made drama and documentary works, experimental films and wrote the libretto for the musical, Tales of Nikolai Gogol, along with composer, David Sidwell, and orchestrator Wayne Senior. It was performed in New Zealand in 2014 at the Clarence Street Theatre and highlights at the Hamilton Gardens Arts Festival. As a researcher, much of his filmmaking output relates to his ongoing research. His work has been seen all over the world, at film festivals, on television and online.