The ‘aunties’, Miriama Wara and Ataneta Barakat are learning to build at Wintec.

There's a different kind of buzz going on in one of Wintec’s carpentry classes where two 'aunties' have swapped their handbags for toolbelts.

Wintec tutor Gene Cooper smiles when he talks about his adult students who he says “put 120 percent into everything they do,” including supporting their fellow students.

"They have brought a calmness to the class. They speak up for students and the students respect them and go to them for advice. They are two amazing ladies who came here because they want to be able to understand the building process from the ground up, including what products to use and the law around building consent. They've added a whole new dimension to this class."

While the younger generation in the class have got careers in their sights, it's a different story for the two Waikato-Tainui women who have a plan to reconnect their whānau (wider family) with their ancestral land.

They realised to get their whānau back on the land, they needed accommodation to live or stay short-term. Their plan to build simple cabins on their ancestral land made sense, but who was going to build them?

“We were both at home, so I said to Miriama, ‘Let’s go to school and learn to build’,” says Ataneta, who enrolled first and encouraged Miriama who had recently lost her husband to join her.

“So, she signed me up and got me out of the house!” laughs Miriama. “And here we are. I’ve already told other people in my age group, I’ve been a woman all my life and now it’s time to do something that the men in our lives had not been doing and we love it.”

“We're on the other side," says Ataneta.

"No, we're just at the beginning!" adds Miriama.

The two have been at Wintec since February and there's no losing sight of why they are there. Ataneta says they want to go off the grid and teach their whānau to reconnect as one with the whenua (land) and the environment.

"We've been accumulating tools," says Ataneta, "I've got two big yellow DeWalt toolboxes and my husband isn't allowed to go near them."

Miriama says she prefers Makita and she's adding more tools to her blue toolbox as they both progress to bigger projects. As they learn, their influence on the class is helping others learn too. 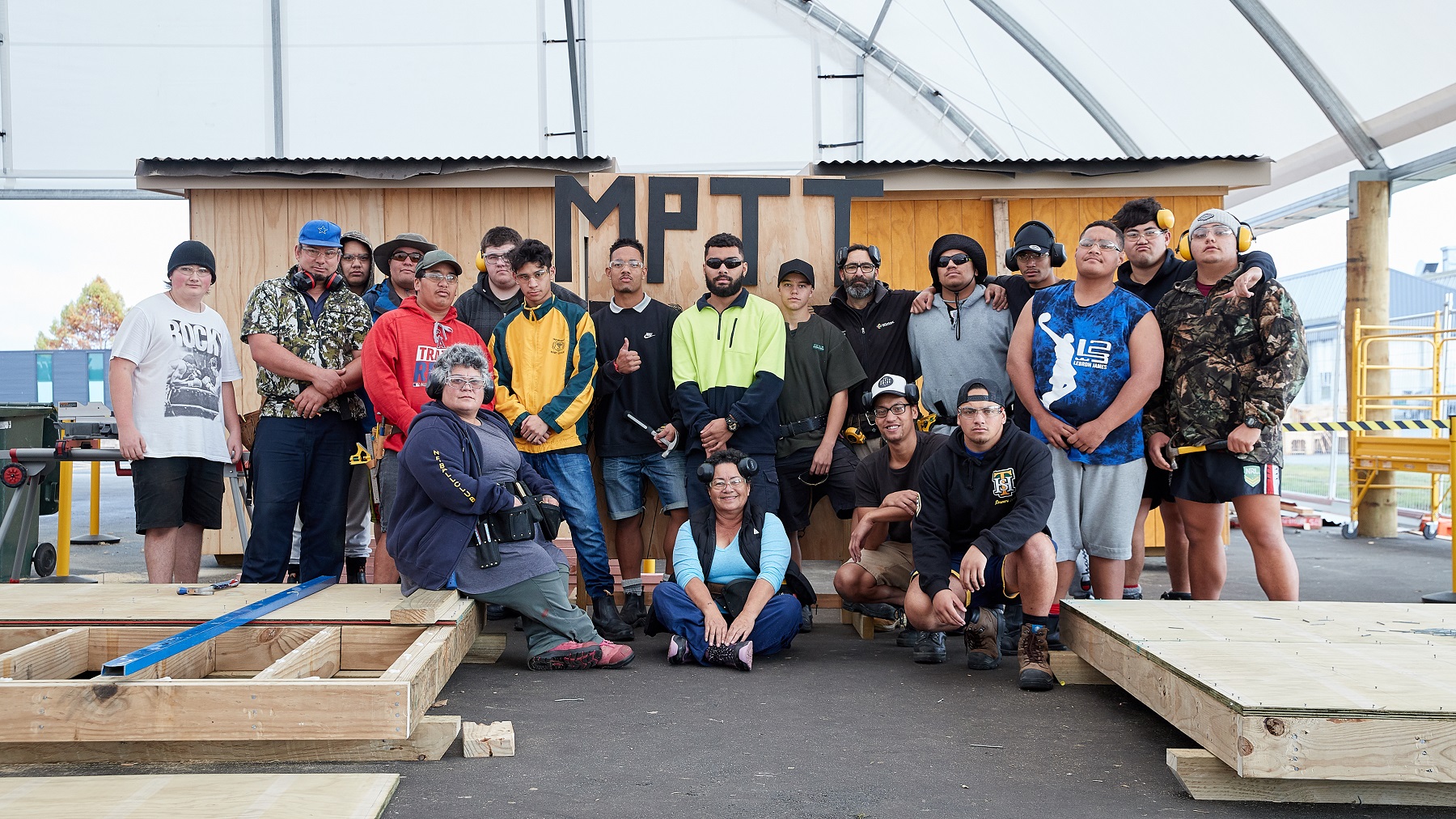 The Level 3 Carpentry class with their tutor Gene Cooper (back row third from centre) and the ‘aunties’ (front left and centre).

"The environment is different in this class, it's a whānau environment, some of the students ask for advice because we're mums and we can understand," says Miriama.

Ataneta says it's not always peaceful.

"If they're making a lot of noise, we yell out “carpentry”, then we hear a chorus of 'Sorry aunties'."

"It's true, I'm the good cop, she's the bad cop, one of us has to be either to make it work," says Ataneta.

The women say that they know when someone is down "so we awhi them".

They also have a system where if anyone is unable to attend class, they take photos and ensure they get the information they need.

Their course ends in in November but along the way they have progressed from using hand tools to create timber joints, built a sawhorse and they are now working on a simple shed.

“I'm already eyeing up where I can add the toilet and shower," says Ataneta.

Miriama says that the experience of being part of the class and learning new skills has helped to get her "back into exchanging with people after my husband died".

Together they say the knowledge they have gained, has helped them look at things differently.

"I'm looking at my house and the way it is built with different eyes," says Miriama.

They both say that the community of support they are part of, wouldn't be possible without their tutor, Gene Cooper.

"He tells the young guys in the class ‘This is your future’”, says Miriama. "I take my hat off to him, he holds his students together and he makes it very easy for us to learn.”

“We’re more of a hands-on type of people and he understands that and takes the time to get to know you. He's a one of a kind tutor."

For Māori and Pasifika people wanting a trades career, the Māori and Pasifika Trade Training (MPTT) initiative is a pathway to a wide range of trade qualifications and apprenticeships. The end goal is for participants to gain skilled and sustainable employment and the course is free to 16-40 year-olds.

Wintec has helped more than 150 MPTT students into employment since 2014. Find out more about Māori and Pasifika Trade Training at Wintec here.