Ruth is on a Middle-earth journey

When Ruth Swartzberg graduated from Wintec a year ago, she never thought she'd practise her passion for art at one of New Zealand's top tourist destinations, Hobbiton Movie Set.

After completing Wintec’s Bachelor of Media Arts degree, majoring in Visual Arts (painting and sculpture), Ruth joined Hobbiton as an assistant painter. While almost everyone knows Hobbiton (situated close to Matamata in the Waikato), as a significant film set for the movies The Lord of the Rings and The Hobbit, few imagine that a “secret army” of props designers, landscapers, gardeners, painters and other technicians work hard to maintain and develop the place. Ruth is one of them.

We met 22-year-old Ruth early in the morning at her workplace where she shared with us the story of her journey from Wintec to Hobbiton.

When asked how it feels to work at Hobbiton, Ruth says she “couldn't have hoped for a better place.”

"As an artist, it’s sometimes difficult to work alone on personal projects. It's a real challenge to find motivation to carry out long-term initiatives every day; some artworks may take months or years to complete,” says Ruth.

Today’s artists and designers are often called upon to multi-task: to seek partnerships, promote their work, set up exhibitions, communicate about their portfolio and understand business.

“Working for Hobbiton as an employee is not only an opportunity for me to practice my artistic talent in a vibrant environment, it’s an opportunity to be guided by a vision. For a young artist, it's reassuring,” explains Ruth.

Graduating from the School of Media Arts at Wintec gave Ruth the necessary skills to get her job at Hobbiton. She never knew exactly what she wanted to be when she grew up, but art was a real passion. Having parents who always supported her decision to learn art, even though they were sometimes a little worried that she may not be able to find a job afterwards really helped.

Ruth chose Wintec because “there was more practical work than theory, unlike other art schools in New Zealand. I don’t mind writing essays, I just prefer practical work.” In addition, her school art teacher graduated from Wintec and encouraged her to consider a media arts degree.

“What I remember the most about my studies is that Wintec has created an environment that is truly conducive to artistic development. Wintec provides important resources especially for second and third year students. For example, it was great to have an individual space, which has everything from the artist's studio to practice. You can leave your equipment on the spot, and have access to many amenities including a large workshop, nice, big open classrooms and plenty of tools to use. Everything is provided to you,” says Ruth. “You don’t feel like you are at school, really.”

“Tutors are a source of inspiration and learning, but they also provide students with knowledge about the world of art that we would not be able to acquire on our own,” Ruth says.

As part of her studies at Wintec, she completed a six-month internship at RAMP Gallery, Wintec’s contemporary art gallery.

“With this internship, I understood the ‘inside out’ of the artistic scene. Art is not only pure creation; it is also many other actors who come into play around the artist. It was an interesting side to see because I didn’t realise how much admin work goes into a gallery space”, explains Ruth.

Currently Ruth is restoring a flower box and a mailbox with detailed dreamlike, country themes, depicting birds and flowers. Soon, when she has a bit more experience, she will be fully in charge of her own "hobbit holes" (the name of Hobbit’s houses) along with her fellow painters and the team of props designers. A real team effort, even if the achievements are individual, which is not always usual in the art world.

Wintec played a key role. “At Wintec, we did a lot of group work, even across departments, such as communication and design students working together on the same project. At the time, I dislike group projects because it’s always difficult to work with people you don’t know but it definitely helped to be able to fit in a team,” Ruth says.

“I really like working for Hobbiton rather than for myself actually. It’s all about making Hobbiton better and I enjoy that side of commitment in art,” Ruth says.

Ruth is excited about continuing her role at Hobbiton where she has a lot to learn. Her colleagues come from a wide variety of backgrounds, including many from the film industry. Driven by the desire to tell stories with drawings and art objects, Ruth aims to continue her career in film sets or in the audio-visual industry. 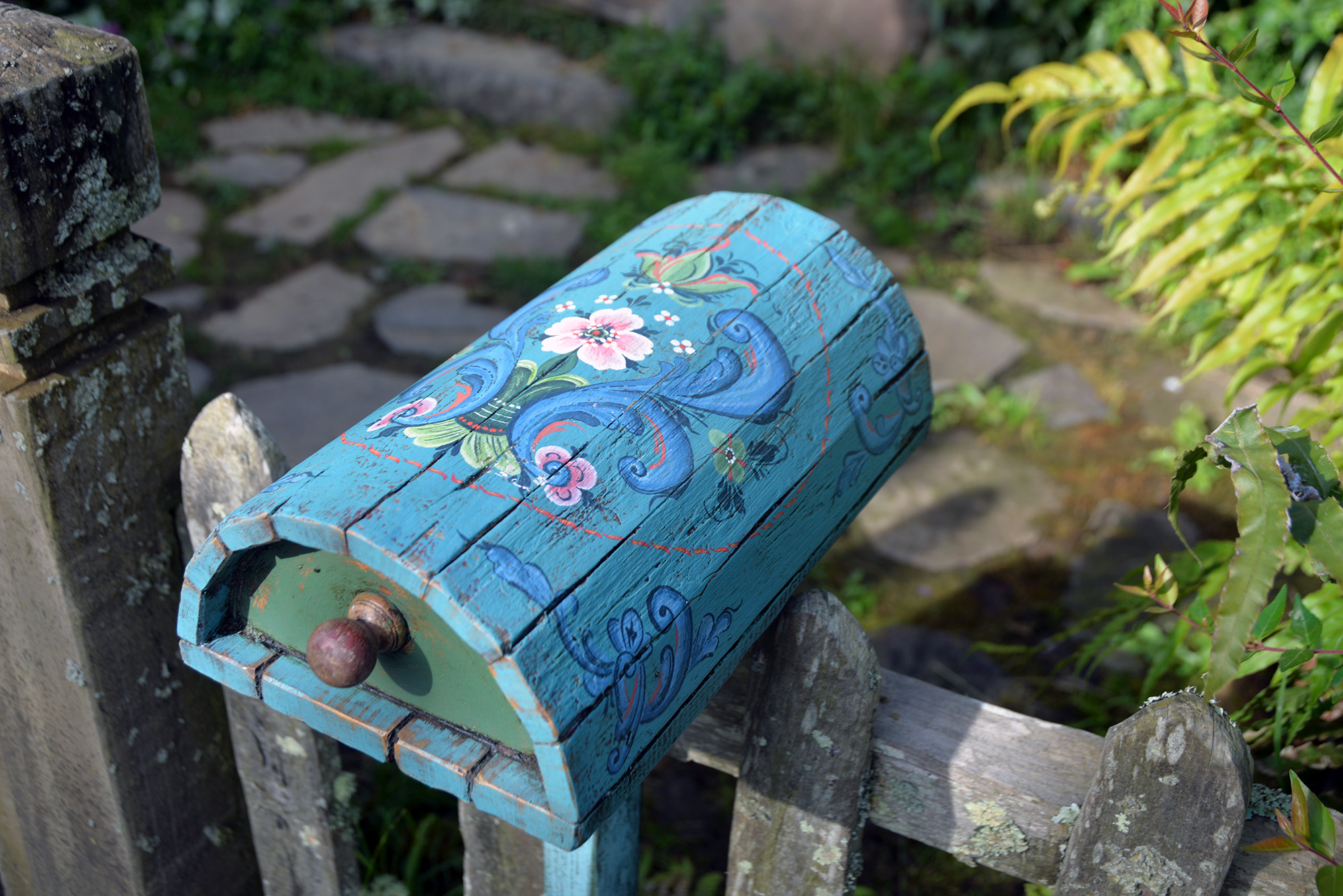 Image: A mailbox painted by Ruth. 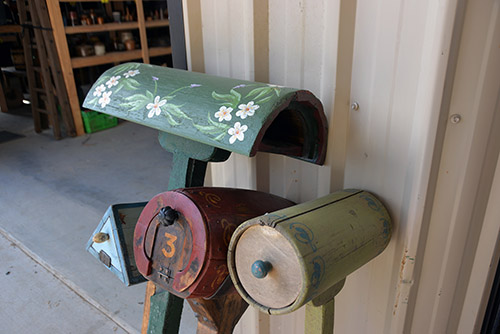 Image: A mailbox painted by Ruth and other mailboxes waiting to be restored. 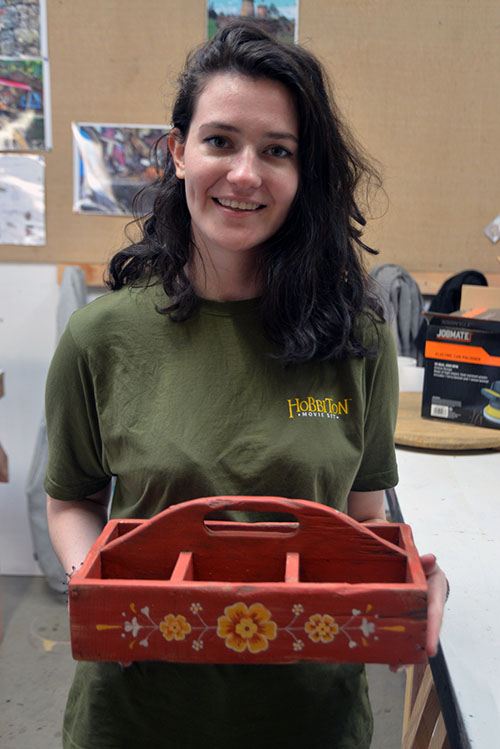 Image: Ruth with one of her recent creations. 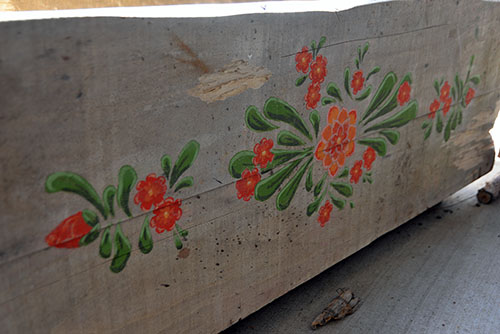 Image: A trough painted by Ruth. 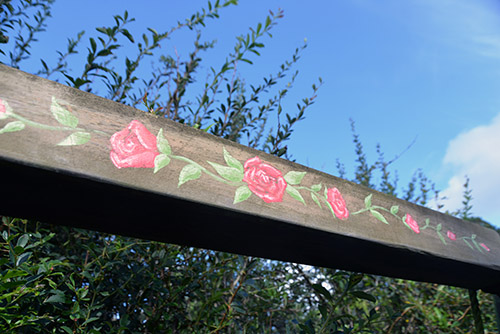 Image: A swing frame painted by Ruth installed on site. 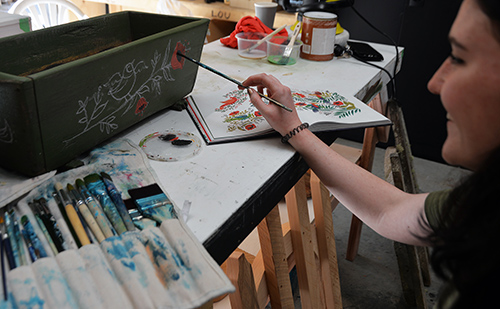