This ākonga performance is an outcome of the School of Media Arts rangahau kaupapa to share some of the pūrākau connected to Te Kōpū Mānia o Kirikiriroa, established in partnership with Tōia Mai. 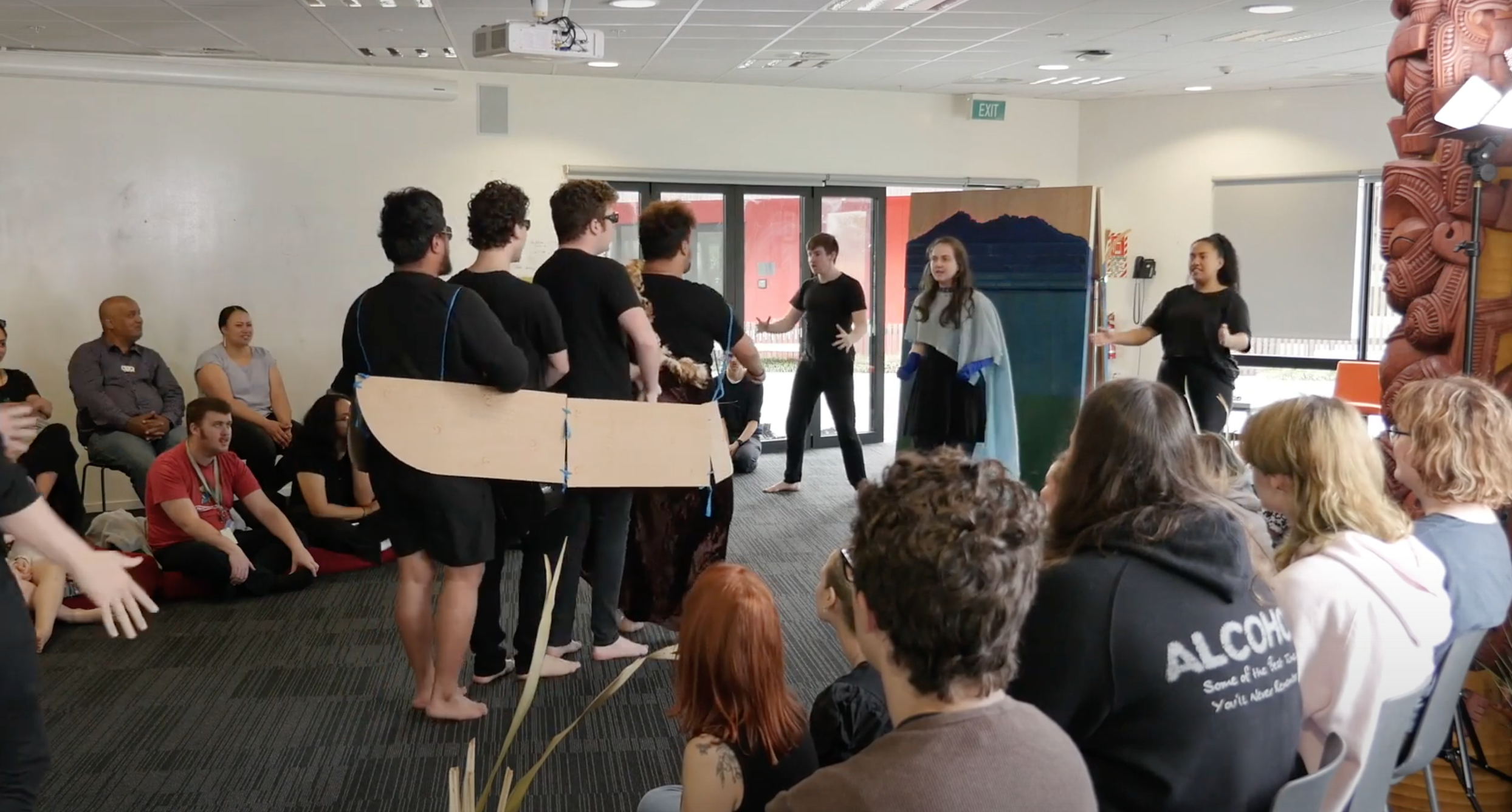 The show toured 11 local primary schools in September and presented this encore performance at Te Kōpū Mania o Kirikiriroa, where the project began.

Produced by second-year Bachelor of Music and Performing Arts ākonga and tutor Jane Leonard, the show tells five pūrākau (stories) about Waikato Te Awa, Kīngi Tāwhiao, Hotumauea, Karutahi, and Little Shrub. It uses a mix of waiata, haka, dance, and theatre, and includes plenty of interaction for the young audiences it was designed for.

Nick Braae, Performing Arts Degree Coordinator at Wintec, said the highlight of being involved in this project was bringing together lots of different people from lots of different backgrounds and seeing them all work collaboratively in different ways to be able to produce this show.

“For ākonga it has demonstrated to them that it’s a privilege to be able to tell other people’s stories. Furthermore,performing and telling those stories involves a particular process defined by a collective kaupapa.

“We have to give a big mihi to Jane Leonard, the lead tutor for this rangahau, who helped the students shape this show. We all really hope that the relationships that have been established through this will continue to grow and provide opportunities for future ākonga.”

Wintec Performing Arts student Michael Kerei, an actor, singer and aspiring playwright, said the highlight for him was being able to portray the second Māori King and play a part in the writing of the story.

“It’s cool to take not so well-known stories and share them to rangatahi so they can continue to share them in years to come. I love that we are celebrating our culture more and more.

“We all had a hand in writing each piece, and it’s really funny. A lot of the stories weren’t super suitable for kids, but we managed to work around that. I want to encourage more Māori and Pacific to get involved in musical theatre, diversity is needed more than ever. We are in a good spot, but we need to keep the movement going,” he said.

Megan Bowden, third year Spatial Design student, got involved with this performance as part of her Capstone Project, a capstone project encompasses a real-life working culture which aims to install a set of specific skills that are both highly valued by employers.

“I thought about how I could get involved and thought maybe telling the stories through screens could be a way to do that. So, I used them to represent maunga, awa and whenua to mirror the stories that were being told.” 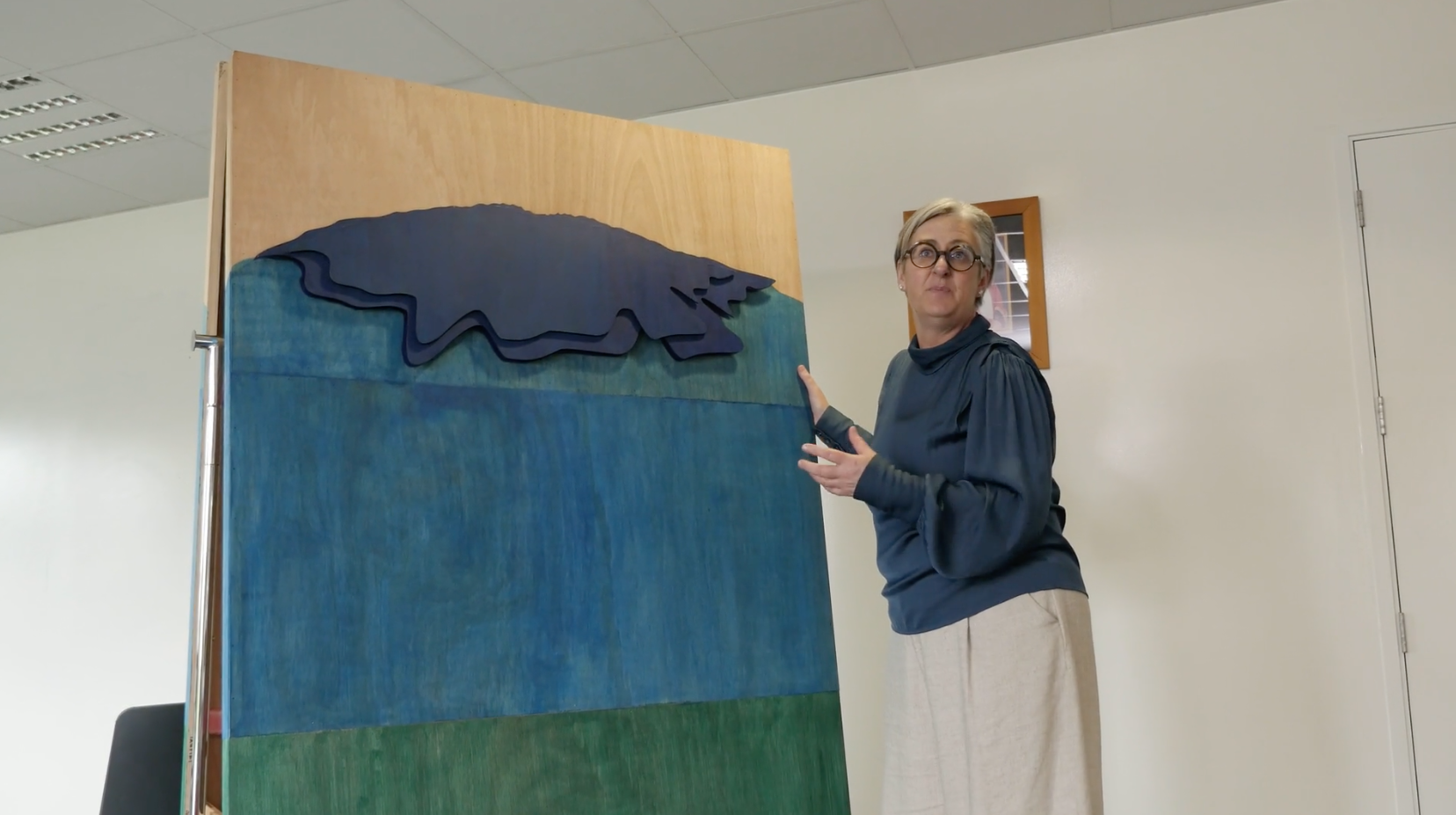 Megan said she took inspiration from modern sculptures like Michael Parekowhai’s Tongue of the Dog when creating her screens to help tell the stories of Kirikiriroa.
Megan had done a history degree in the 1980s at the University of Waikato and said that helped prepare her for helping create the screens for this performance.
“The history of Hamilton and that name only goes back 150 years and there’s a lot that came before it was called that.”
Receive our news direct to your inbox