Have you got a spare room? Want to learn more about another culture and maybe make a lifelong friend? Have you considered homestay hosting?

The Wintec | Te Pūkenga International Team is currently recruiting for new Hamilton-based homestay hosts to open their homes to students and scholars for 2023, for short or long-term placements.

Homestay accommodation means that students live with a homestay host or family. The environment provides a safe, stable and supportive space that allows students to settle well into New Zealand.

We recently caught up with some of our homestay hosts to learn about their experiences, why they do it and if they’d recommend it, read on to see what they said.

A homestay is more than just a room rental - students live as part of the household and should be included in 'normal' everyday activities such as meals, family celebrations, religious practices and sporting events.

Steve and Supatcha Judge have been hosting since 2005, they have hosted 38 students so far.

“We signed up as a host as we have a five-bedroom house and with just two of us in it it’s very empty. We love doing homestays as we get to meet different people from all over the world.”

Supatcha is originally from Thailand and Steve is a Kiwi which, they said works out well for Asian homestays for food.

“We are friends with every homestay that has stayed here, and we are still in contact with them. We visit them and their families if we are in their country on holiday. Some of the parents show us the sights of their country and we have dinner with them. They say – ‘you have looked after our children while they are in New Zealand so now, we look after you’.”

The couple said they would recommend others to be homestay hosts as it’s a great way to be an ambassador for New Zealand at the same time.

“We end up being their mum and dad while they are here and some call us that as well.

“Some can take more looking after than others as they have never been out of their own country before and can get sad, especially the young ones under 18, but they soon perk up while studying.

“We take the time to make sure they have banking, buses, shopping and if they miss their buses, we drop them off. We also don’t like them walking the streets at night so will pick them up if it’s night-time when they have been out or working."

The couple have hosted students from Wintec, the University of Waikato and Hillcrest High School and said they have had no problems.

“They just about end up being our children if they are here long term and become part of our International Family.

“If it’s their birthday we give them a birthday party with a present and a happy birthday singalong. Some of them have never had that before in their own country and they get very excited or a bit teary.” 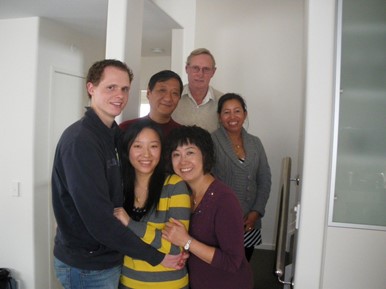 Steve and Supatcha (back) photographed with Jocelyn from China, who was their first homestay in 2005, and her parents and new husband Peter. She has two children now and is a New Zealand citizen.

Carol Kappely, another homestay host, has always been interested in travel, local and overseas, and she’s a friendly, outgoing person so once her family moved on, she had a couple of short-term school and university students come and stay when friends reached out saying they needed a space.

Then when they moved out, she considered Wintec students and found it worked for her, short and/or long term as it was “good company”.

“I have been very lucky for the majority of the homestays, and definitely learned of their differences with showering, clothes washing, breakfast food especially, also persuading them to have more conversations in English, especially in the car on a trip. 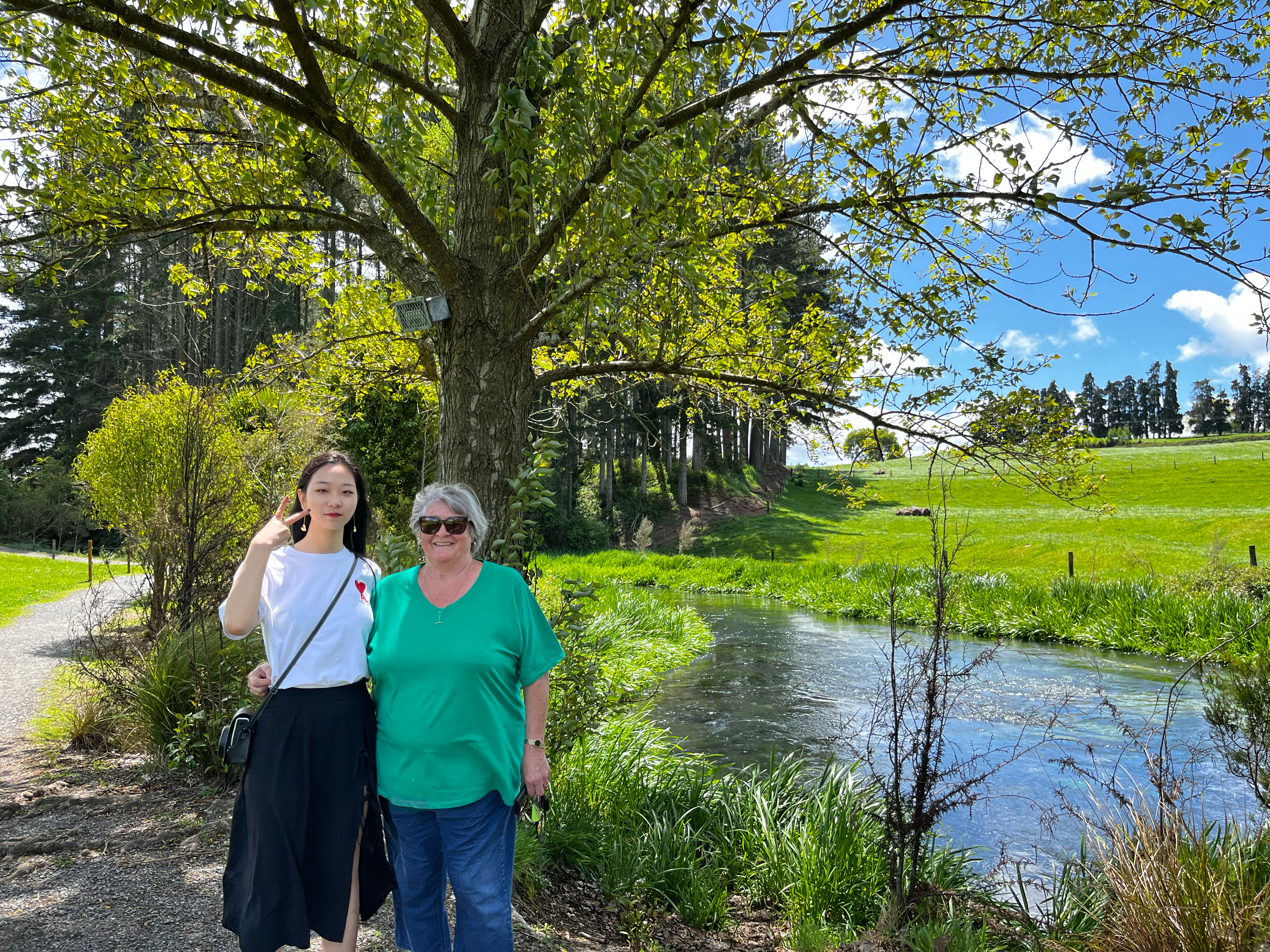 Carol photographed with her current homestay, Ruofei Du (Duffy), at the Blue Springs.

“I would recommend this to other people but consider your family priorities as well. Especially with grandchildren staying over. I have been lucky by explaining to my students about having sleepovers and generally they get to love the kiddies and share conversations,” Carol said.
Eleanor Pringle has been hosting international students for over twenty years now.
“I live on my own, have spare bedrooms and thought having students would be good company which many of them have been.
“I have learnt a lot about different cultures, foods, naturally, and I’ve kept in contact with a few of them. Generally, I host female students but in saying that, I had a Chinese boy living with me for three years and he was delightful and fitted in so well.
“As long as I can remember growing up my parents always had either school teachers or dental nurses boarding with them, so I guess that is something that has rubbed off on me.
“One young girl I had for three years is now nursing at Waikato Hospital and I am so proud of her. It is also nice when I get comments from students that they have enjoyed living here, I treat them as if they were one of my own.”
Mary Ann Wilson and her family have been hosting for over 20 years and in that time has had just under 100 students.
“Coming to a new country is always such a daunting experience. When you know no one, or have limited English, simple navigation can be difficult. From my own personal experience, the biggest difference that helped me settle in New Zealand was the friendships I had made and the support I received from doing this. Once I had settled myself, I was approached about hosting students and thought it would be a good idea to be able to give back and provide support like I received coming here. From there, the rest was history.”

Most of her homestays have been short term, but she has had a few long-term students (who have stayed for nearly four years) and these students have become long-term family friends. 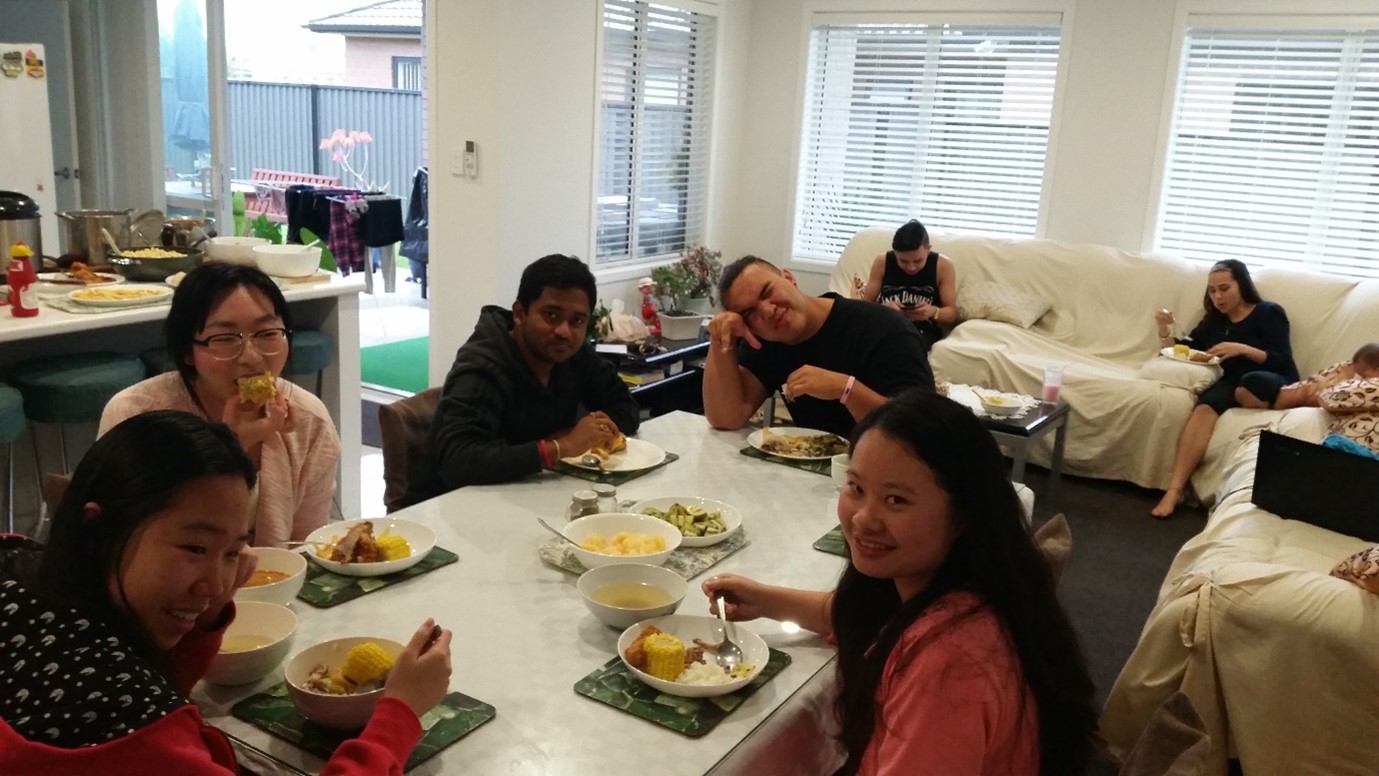 “We have remained in contact with many of our students and it is such a delight catching up with them down the line and seeing what they get to after us. One of the most valuable things I learnt as a host mother when it came to all the different cultures was the food. I learnt so many new recipes and skills which have been added to my skillset. This has since brought comfort to many of those who end up in our care as it can remind them of home.

“If you are passionate about supporting newcomers, sharing knowledge about your home country or wanting to learn about the world without leaving your home, I would recommend this to you. Not only does it broaden your knowledge about other cultures, way of life, food, and new interests, you can gain some new lifelong friendships and connections that last you a lifetime.

“Enjoy every single moment you have with your students and be accommodating as much as you can. Treat them as much as how you would like to be treated when away from home.”

There is no such thing as a typical homestay, hosts can vary greatly. Currently there are young families with children, single parent households, retired couples, and single hosts.

Some homestay hosts have made lifelong friends with their students and other host families. There is a great homestay community, and it is an amazing way to make friends, make connections and learn from others.

If this sounds like you, or you know someone who may be interested, please contact Sally McGill at homestay.hosts@wintec.ac.nz for more information or an application pack.
Receive our news direct to your inbox