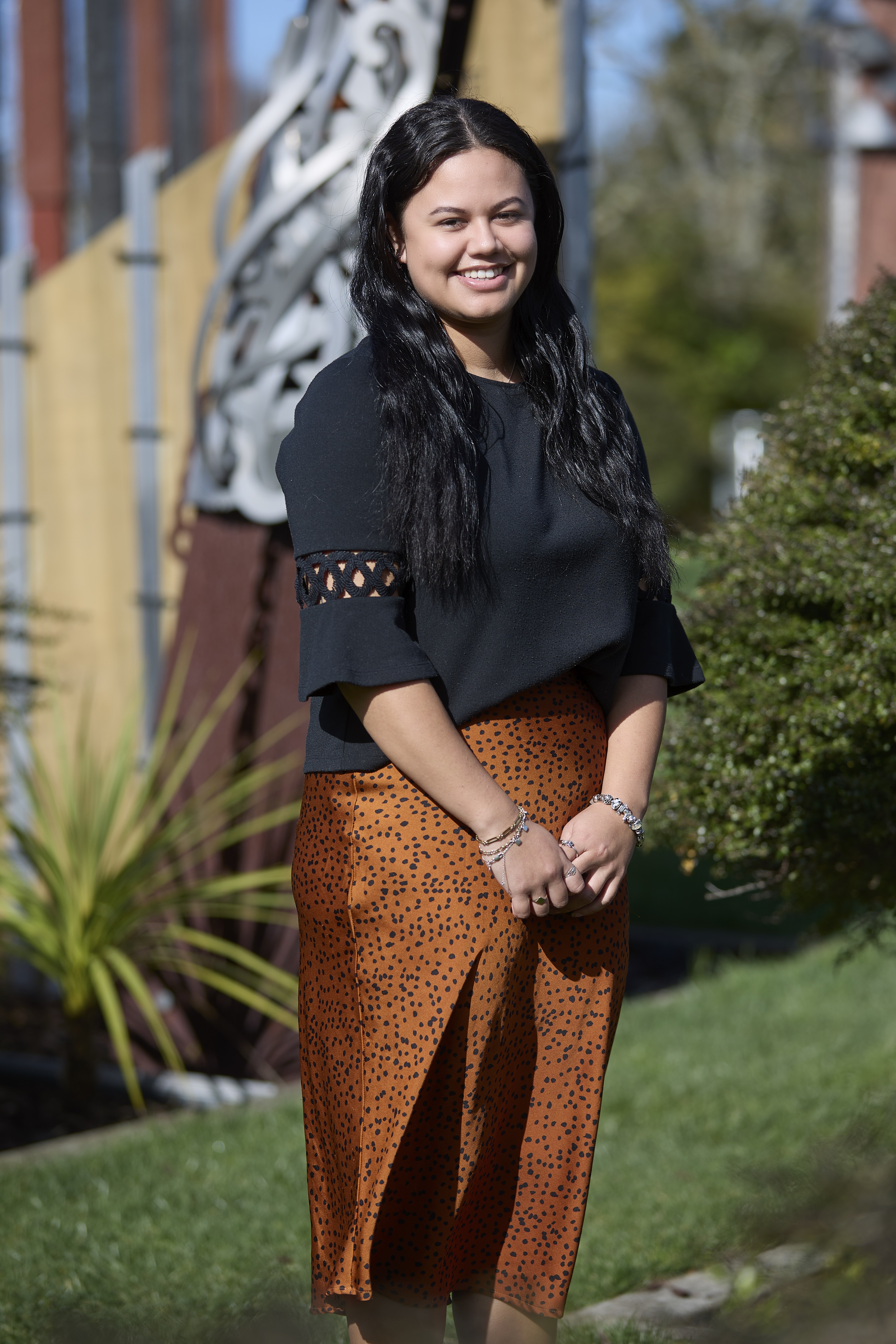 Fakaalofa lahi atu, kia mutolu oti
Ko Ruby Siakia haaku higoa
Nofo au I Hamilton
Ko Des Siakia e higoa he haaku matua taane
Hau au he maaga ko Lakepa, Niue
Ko Rachel Siakia e higoa he haaku matua fifine
Ko ia koe fifine New Zealand
Ruby Siakia is one of four siblings; her mum is New Zealand European, and her dad is Niuean. Her Dad moved to New Zealand with the dream of raising a family with ample opportunities at their fingertips.
Ruby is the first in her family to graduate with a Bachelor’s degree.
It’s been a journey, but she has just landed her dream entry job in Human Resources over in Missouri, United States of America. We recently caught up with Ruby to learn about her time at Wintec and how she earned her new role.
After high school Ruby had one semester off and then her dad told her she needed to figure out what she wanted to do. Ruby investigated studying at Wintec. At first, she thought about doing Early Childhood, but decided she was more suited to some form of business studies.
She enrolled for Applied Business, majoring in Human Resources, but hated her first week. She came home crying and wanted to quit.
She was in two minds as she really liked Human Resources and thought it was a great branch of business to get in to and a way to help people. But she was scared to go back.
“My dad and siblings told me to push through, and that it will get better. So, I went back. My dad dropped me off every day. I ended up loving it. I’m thankful to my family for pushing me as it’s given me so many opportunities.
“My parents would stay up with me when I had assignments and were my biggest support. I always got sushi as a reward when I passed an assignment or paper. You have to reward yourself,” Ruby said.
Ruby never got to meet either of her dad’s parents, but he has always told her the education she gains is for them.
“Business Heritage and Culture was my favourite paper in my first year. Commercial Law was also awesome because it was a topic I’d never really touched on before.
“Second year was fun as I had lots of friends and I got to delve more into HR which was what I wanted to get into. Industrial Relations was my favourite paper that year. It was good to learn more about the history of unions.”
Throughout her studies, Ruby worked part time at Dinsdale Jewellers in Hamilton.
“They were awesome for letting me work around my tech schedule. When they closed, I became a casual at Precious Metals and Diamonds in Centre Place, super close to Wintec so I could just walk over after course. I also did a bit of work at a catering company, Great River Catering.”
Ruby did her placement, as part of her degree, at the Waikato Pacific Business Network.
“I’ve been there since April. It’s opened chances to meet a lot of people in high up roles, ministers and executives. I just do everything I can to help. It’s given me amazing role models and taken me to important meetings, including with the Ministry of Foreign Affairs and Trades and the Ministry of Social Development. I’ve been able to observe, participate and learn so much through my internship there.
“I’m looking at accounts for them now and rewriting policies and I got to create an executive booklet which was cool. I also manage the social media accounts. It’s taught me a lot and I’ve stayed on past the hours I needed for course as I’m still learning so much. I’m staying on until December.”
In January Ruby will be jetting over to Ridgedale, Missouri in the United States for her first corporate job in HR, thanks to an opportunity presented to her by Wintec kaimahi, Industry Relationship Manager, Nima Riini.
“Nima came to me and said she had a good opportunity for me. She mentioned America and I thought, oh no, I can’t go to America, I’m too much of a home body. But I thought I’ll hear her out because you must take every opportunity that you can get. So, I went to the meeting, and it was a job opportunity for a company called Big Cedar Lodge. The head of HR, Melanie DeLong, was there, she played an amazing video and presented the opportunity.”
Big Cedar Lodge boasts being America’s premier wilderness resort. It’s a remote haven of natural beauty spread out over 4,600 acres where rustic luxury is tucked into the rugged landscape of the Missouri Ozark Mountains, overlooking sparkling Table Rock Lake.
“I didn’t go for the one-on-one meeting that day, I went home and told my parents and thought about it. Dad thought it sounded amazing. I thought about it a bit longer and I messaged Nima to see if I could have a kōrero with Melanie. Nima set it up and after our chat Melanie gave me a verbal offer to go there to work. I was shocked.
“When I hopped off the call I just sat at my computer in disbelief. So, I did a video recording of how I felt at the time, and I cried. I was just so amazed.
“I have a one-year contract and I’ll get to learn all aspects of HR in America.”
Ruby said her family was ecstatic, mentioning her dad, “he takes it back to ‘your grandparents would’ve been proud’, which is always something I like to hear. I’m doing something for the family name”.

On top of her other accomplishments, Ruby also received a certificate of merit at the Wintec Applied Work-Integrated Learning Conference Awards, for her research presentation at the student-led conference in early November.

Ruby hopes she can motivate other people to take the opportunities that come along like this. She said if she could tell her younger self anything now it would be to grow up and get some independence.
“’Aspirations without actions are hallucinations’, I saw that quote one day and it really resonated with me, I don’t want to be hallucinating,” she said.
Receive our news direct to your inbox