Researchers from Wintec | Te Pūkenga and around Waikato gathered for two days to delve into planning for a sustainable future, while thinking about the here and now.

This is the second Sustainable Futures Symposium hosted at the Wintec | Te Pūkenga City Campus. 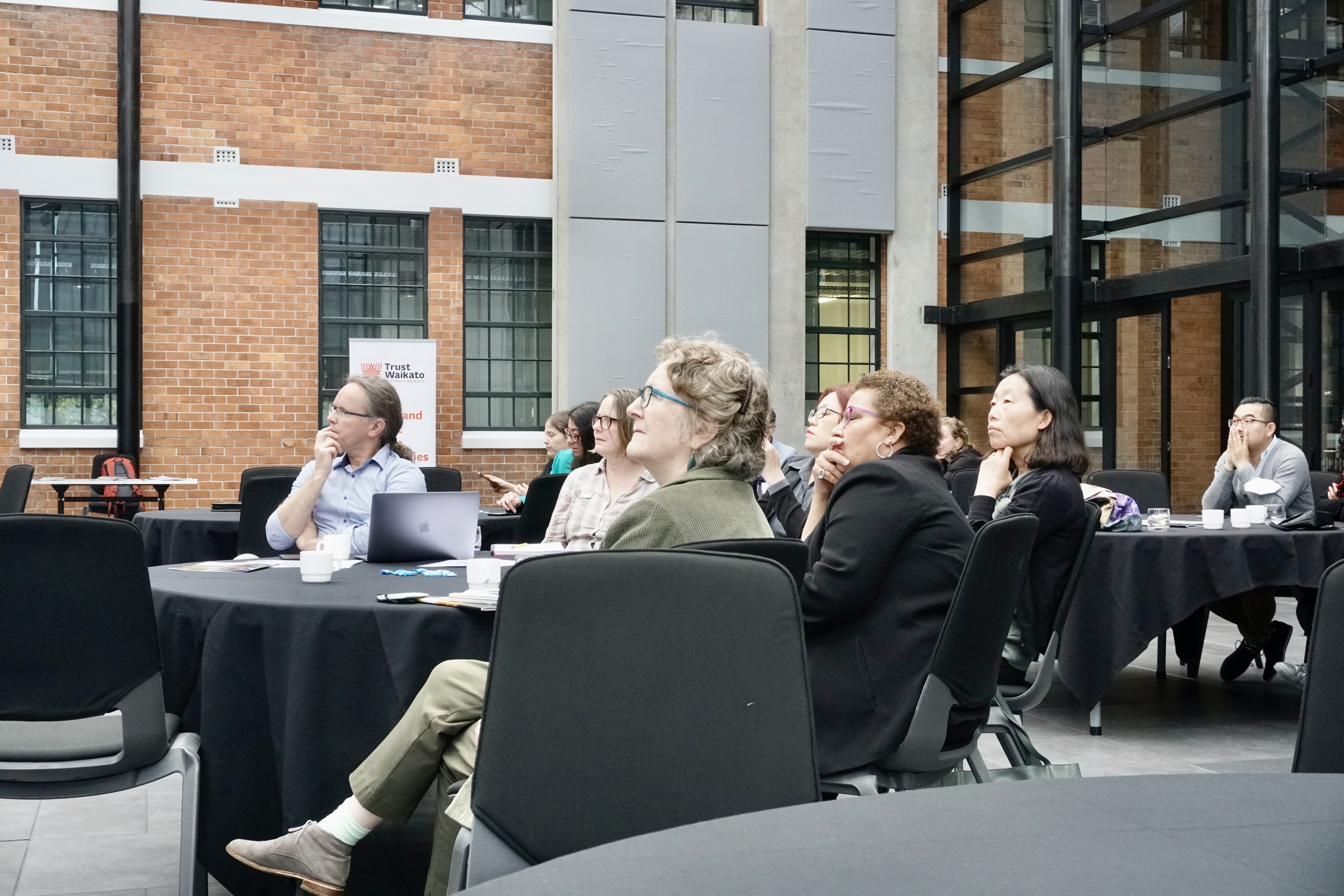 The first event, in 2020, arose from the recognition that several researchers across Wintec were working on a variety of projects under the umbrella of sustainability – whether in terms of environmental concerns, educational changes, cultural enrichment, or personal health and well-being.

In the intervening two years, many of the issues have become even more prevalent and pressing and requiring of more voices and perspectives to solve the complex problems. This year there was a deliberate effort to bring together community organisations, public and private sector organisations, and academics from tertiary organisations across Aotearoa, with the aim that through listening and discussion, new ideas and solutions would emerge.

“It’s great to see changes already being made when it comes to sustainability. You walk into a supermarket now and it’s common to see things like, ‘this is made from recycled bottles’ on products, showing that companies are shifting away from using non-recyclables.”

She also spoke about generational changes, referring to when her daughter moved out of home.

“When my daughter first went flatting, she was shocked her flatmates didn’t know how to recycle, but I was amazed by her reaction to that as when I first went flatting recycling wasn’t even on my radar. To me that highlights the change in thinking between generations.”

The first keynote speaker was Waikato University Professor Iain White, who spoke about his plan for a 20-minute-city. 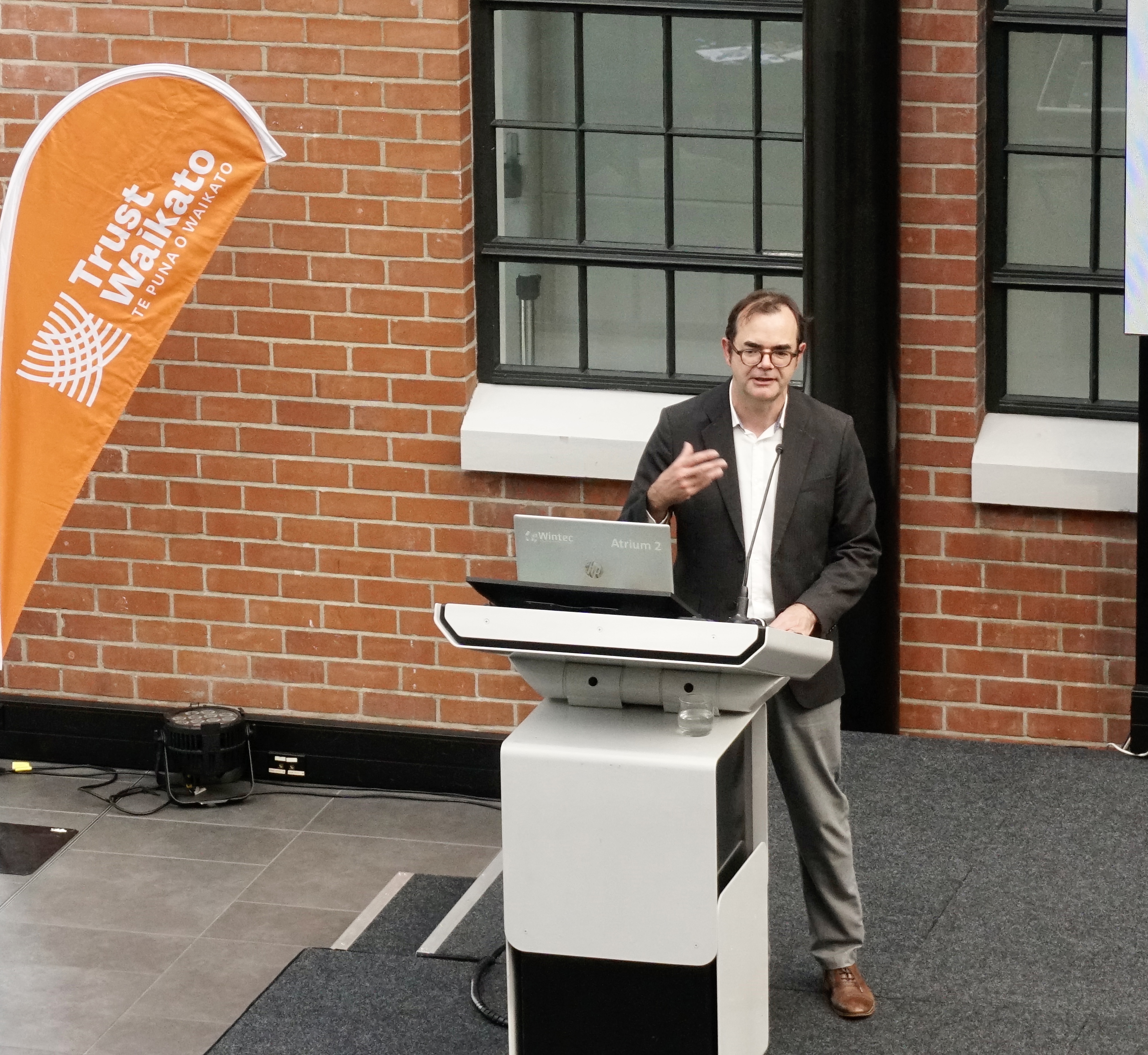 “We have a housing crisis. We have an infrastructure crisis. How we move about in our daily lives makes a huge impact on society, the gas emissions we make through transport are huge. We need to change, to transition, but that transition needs to fit our lifestyle and be achievable,” Professor White said.

He then explained his idea for Hamilton to become a 20-minute-city, “a 20-minute-city would give you most of what you need for a good life within 20-minute walking, cycling or public transport distance”.

This was an idea Professor White came up with during lockdown 2020, he proposed it to the Hamilton City Council, and they applied for a government grant with the proposal. Since then, they have infiltrated the 20-minute-city plan into the city’s long-term plan as well as the city’s climate change plan.

Professor White said it was about bringing planning back to people. He has held several workshops asking people what they want for a good lifestyle and one of the best answers he said he’d had was, “I want to be able to hear birdsong wherever I am”.

“Imagine being the city with the slogan – You’ll never be more than two minutes from birdsong if you live here!” Professor White said.

Keynote speaker NIWA’s Dr Paula Blackett spoke about a gamification approach to getting people involved in the discussion on a sustainable future.

She said conversations around climate change were often hard to start.

“There’s so much information that it can be paralysing and become too hard. We want to put an end to that and find a way through. So, the question is how do we start having these conversations with communities in a way that is empowering so they feel they can do something, they can find solutions and make changes?”

This is where Dr Blackett started working in the game space. 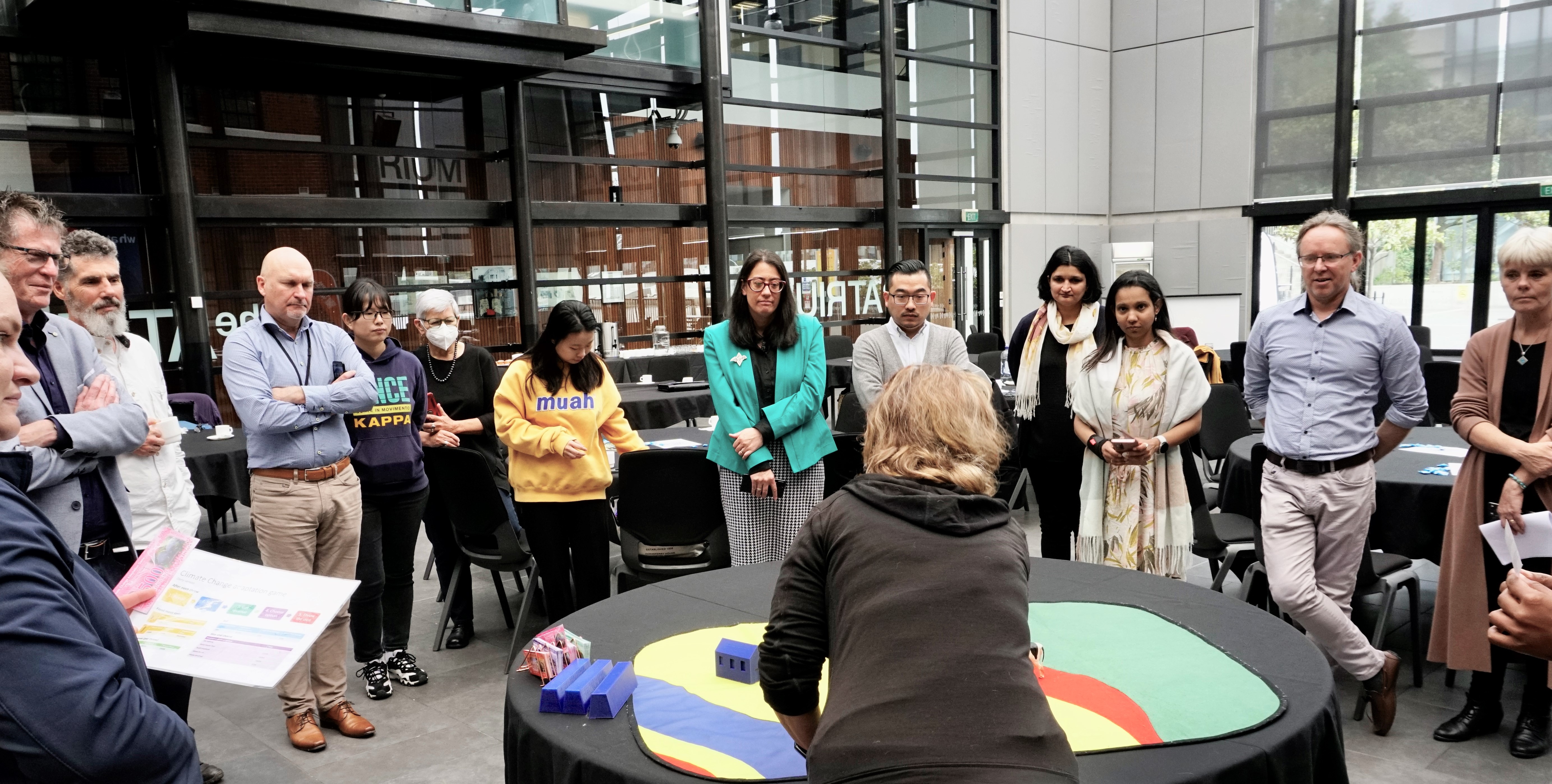 “We see games as a way we can get the point across and help people start thinking about solutions.”

Family Farm is the name of the game, it makes the player think about the risks of flooding on a farm, what solutions they could come up with to mitigate risk and when it’s smart to implement those solutions. There is no way to win the game where every single thing goes right. It’s a way of showing your choices have consequences, even if it has a good outcome for you as an individual, it doesn’t mean the total outcome is good.

“We know our climate is changing. We can expect changes in temperate, shift in rainfall and sea level to rise. The pace is unknown. We have some idea for a small timeframe but depending on if we can mitigate the rate at which things are currently changing that will change the pace and so it can’t be certain.

“Communities are beginning to feel the impacts. We can all list a number of communities who have been flooded this year and we will start to see more of that. Having a not so serious way to talk about such a serious issue can remove barriers that make these initial conversations hard. It’s a start.” she said.

Keynote speaker Dr Rob Bell, of Bell Adapt Ltd and the University of Waikato, spoke of the necessity of responding to climate change in the way we plan and develop infrastructure.

He said even if all carbon emissions ceased immediately, the current rise in global temperatures would continue to melt polar ice caps for decades to come, resulting in rising sea levels that will have a major impact on areas with subsidence, such as Nelson and Wellington.

But, he said, since it was difficult to predict the world’s commitment to slash carbon emissions, it was unclear what the best strategy would be for future-proofing our infrastructure, so he posed the question: Do we prepare for a best-case scenario, the worst case, or somewhere in between?

Rani Fernandez, programme manager of the Southern Institute Technology | Te Pūkenga Certificate of Environmental Management courses spoke about her work with the Micro-Investigators down south.

Rani coordinates Micro-Investigators field sessions with local schools and links them to teaching in her certificate classes so her students get a chance to practice environmental communication. 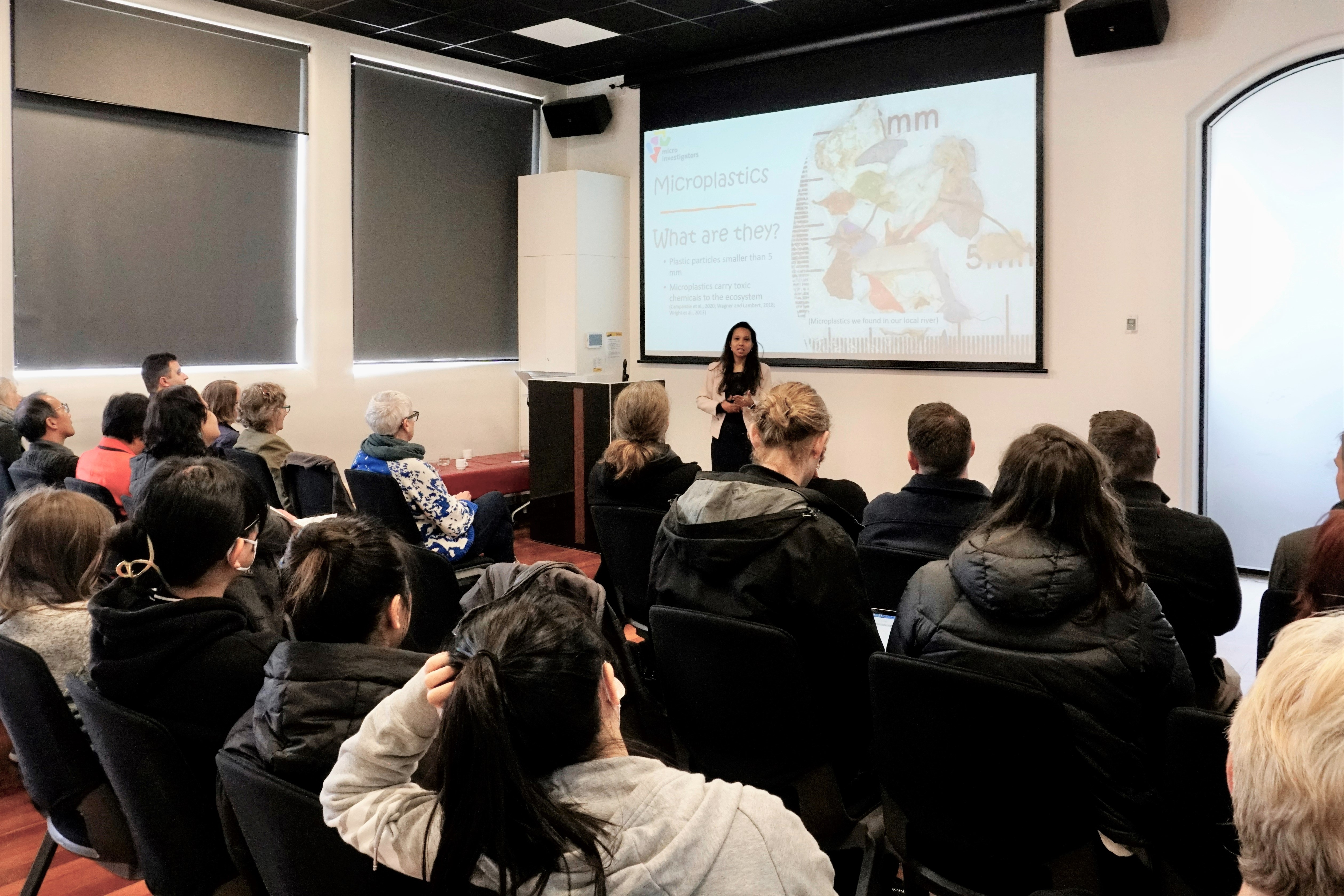 “When it comes to looking after our environment it’s about teaching people from earlier childhood level up. We have seen that in our microplastics research which takes a tuakana-teina approach. We pair our tertiary students with younger children who collect water samples from our local waterways.

“We’ve found this gives students the confidence to learn about the environment from a young age and it also helps them realise they can make an impact and change the world.”

Read more about the programme here.

“It’s all about connected lives lived lightly. Connection is what we are here for and if we don’t have that, then what’s the point?

“In transport we talk about accessibility, meaning how close and accessible are destinations? But no one is looking at who the people are that are trying to get to those destinations. Are they disabled? Do they have prams? If we had that information planning, transport infrastructure would be so much better. 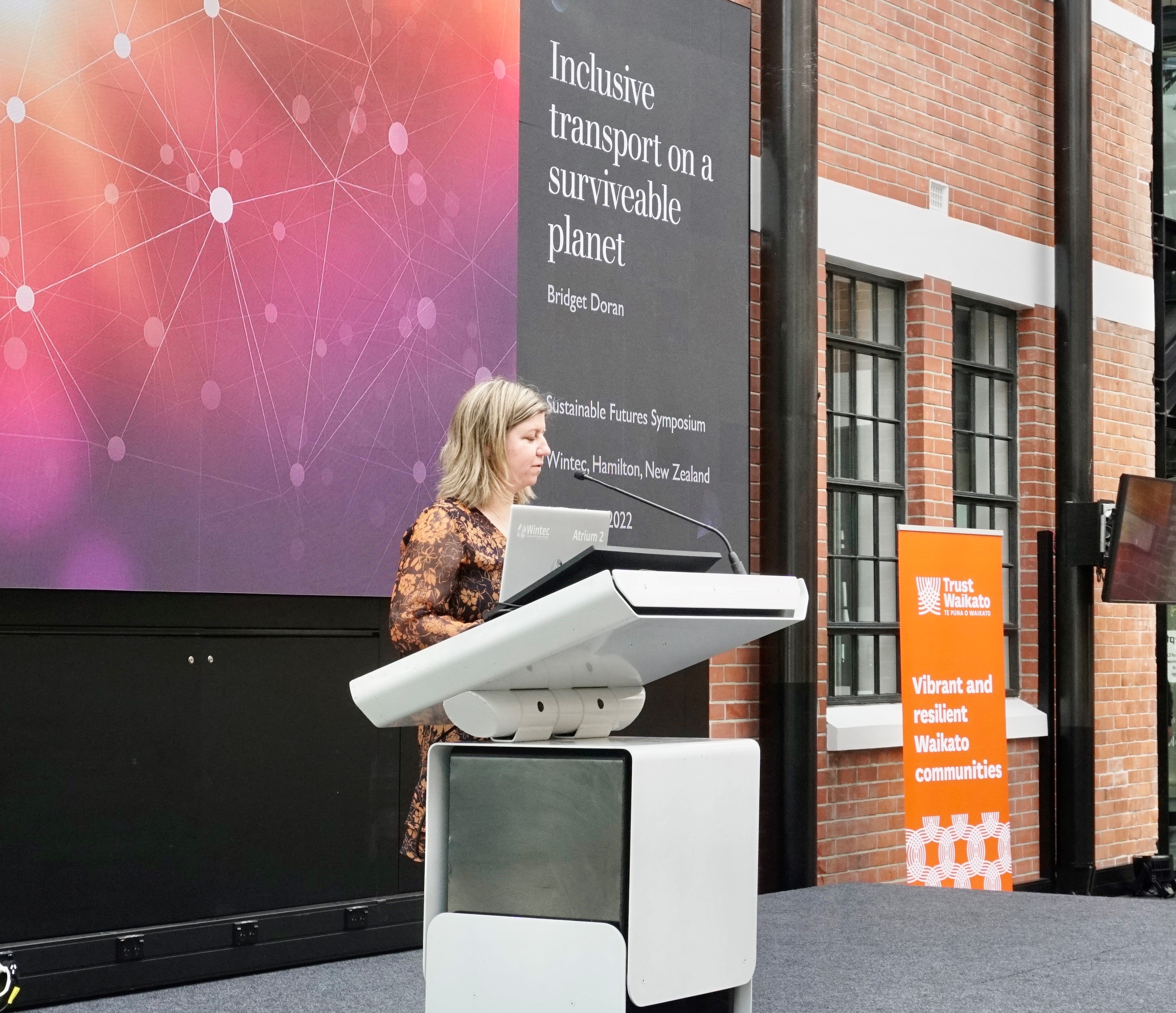 “We should have more connection between the things that really matter and the infrastructure we build to get to them,” she said.

The symposium was closed by Te Pūkenga Sustainability Lead, Ehsan Yaeghoobi, who spoke about the direction Te Pūkenga would be taking when it came to sustainability.

Yaeghoobi started with some statistics on the Te Pūkenga network to remind people how large the organisation was.

“We are going to have 250k students, 10-12k staff. We have 1200 buildings and 1100 cars across the network which means we have this huge footprint and at the same time an opportunity to help reduce emissions.

“Te Pukenga is committed to sustainability. You can expect our sustainability strategy next year. We are still engaging with priority groups (people with disabilities, Māori and Pasifika people) and ākonga further.

“As a member of the Carbon Neutral Government Programme (CNGP) we are calculating our carbon footprint for the entire network for the first time. We will publish our first emissions report and emissions reduction plan by December 2023 aligned with CNGP requirements. We are also completing a fleet baseline assessment for our 1100 vehicles. This will help us understand how we are utilising our vehicles,” he said.

He said Te Pūkenga was taking a holistic approach to sustainability by responding to challenges in all aspects of sustainability including environmental, social, cultural, and economic.
Receive our news direct to your inbox