Students take on the birds at Lake Rotopiko

Wintec science students Sasha Dowling and Dip Barot are part of a research team at Lake Rotopiko where birds are creating a health risk.

Encouraging more native wildlife at a Waikato lake has created a developing health risk now that around 500,000 noisy ‘pest’ birds have moved in.

A science research team from Wintec have been working to help save Lake Rotopiko. They are part of a collaborative research project launched in 2020 between the National Wetland Trust, Wintec and Toi Ohomai Institute of Technology.

The Waikato forms the largest collection of peat lake habitats in New Zealand. Rotopiko, located south of Ōhaupō between Hamilton and Te Awamutu, provides a habitat for animals and plants adapted to these special wetland characteristics.

Since the completion of its pest-proof fence in 2013, and the successful eradication of mammalian pests (except mice),  the wetland area and its lake, has become a sanctuary for ‘pest’ birds, such as starlings and sparrows, which have now reached plague proportions.

Wintec science tutor and academic, Nicolas Sandoval who is overseeing the Wintec research project says an issue with developing native sanctuaries like Rotopiko, is that exotic birds are able to use their defensive mechanisms, such as identifying predators, to know that inside the pest proof-fence the habitat is free of predators and safe for them to roost.

“The side effects of mammalian control have been overlooked and we are the first researchers to look into this.

“An estimated 500,000 birds arrive each night to roost at Rotopiko. They sleep together in groups shoulder to shoulder. The sound is deafening from this collective of birds squawking until sunrise where they then disperse until sunset.”

The research team recorded the resident birds during the day and again in the evening roosting time when their deafening sound becomes a clamour not unlike a thousand tambourines being played at one time. Sandoval says the contrast between the two demonstrates the scale of the roosting problem.

Listen to Lake Rotopiko resident birds during the day. 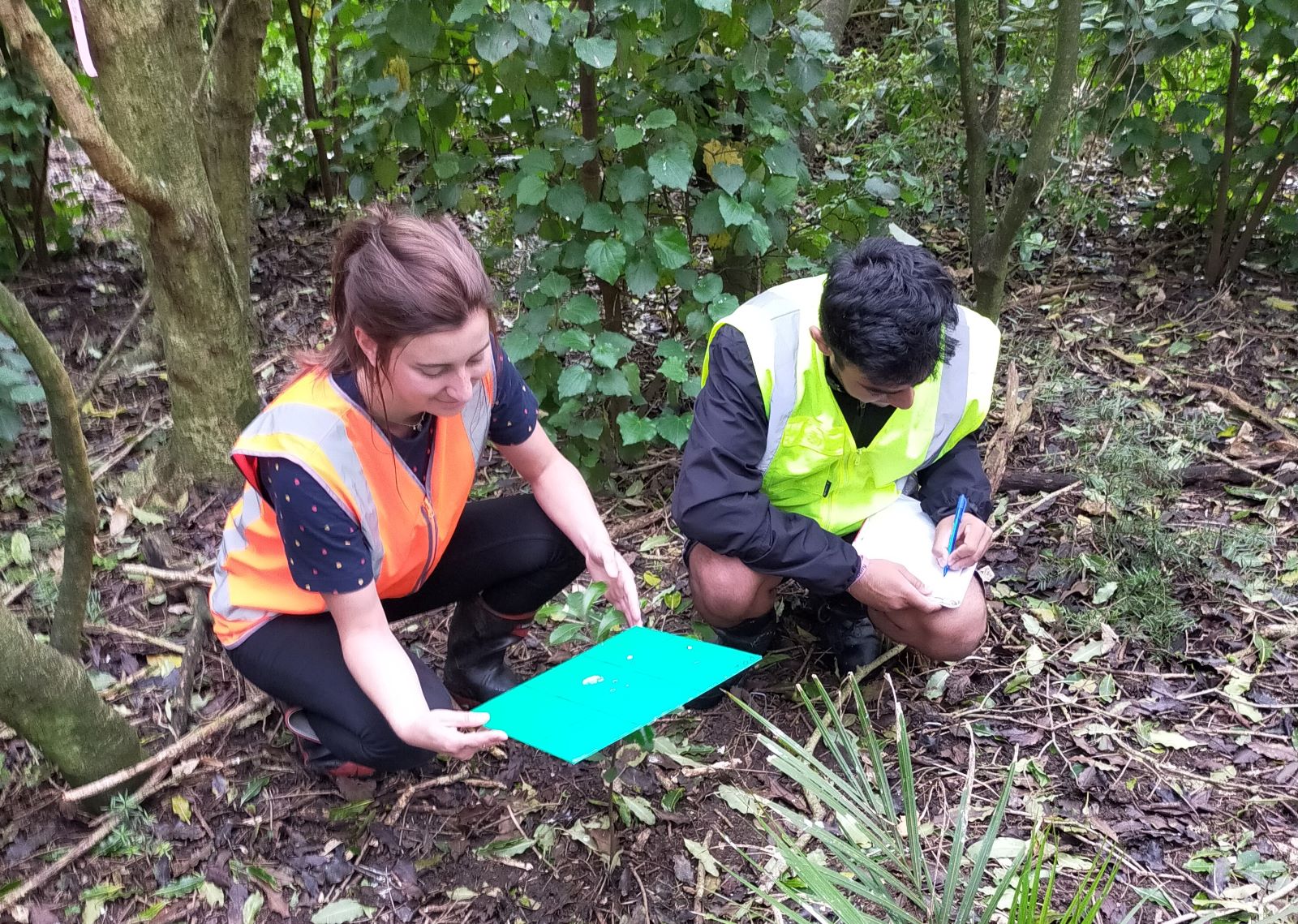 Wintec science students, Dip Barot and Sasha Dowling (pictured above) have been carrying out multiple research activities since Wintec’s first involvement in June last year that aim to control the growing population of pest birds at the site.

Sasha says the Wintec research module was her favourite, and it was “an awesome opportunity to be able to have a hands-on learning experience”.

“This research module was great because it allowed me to collect real data and appreciate how much effort goes into research. We spent time in the classroom sharing ideas and brainstorming ways to make them happen. Then we would go out on the field testing and trying new ideas, collecting data, and learning about the New Zealand environment. Much of which we could not have been taught in the classroom.

“At the end of the module, we had all this data to analyse, it was really satisfying knowing that we had collected it ourselves.”

The students started by creating a monitoring index, placing 50 plates across the wetland to measure the amount of guano. They collected the results twice a day to determine how many roosting (night) and resident (day) birds are at the lake. Sound recorders were also used to give a different type of measure, and they compare their results to the plates to generate a robust monitoring system.

“Creating the guano plates was interesting because, as far as we know, this method has not been used to measure a bird population of this size,” Sasha says.

With a monitoring system in place, this year the Wintec science research team will collect chemical and biological data to compare with the index.

One of the new control methods being tested is by hanging bottles of wood vinegar from the trees. The vinegar is created by burning wood at a high pressure then condensing it down into a liquid. It works to disperse birds who do not like the fumes.

The students will also be able to test how quickly any control measures that are used change the chemistry or the microecology of the site, and if they have any effect controlling the population of birds.

Find out more about studying science at Wintec.

Passion for organics takes Eady from the farm to tertiary study