Wintec Music and Performing Arts students, staff and programme advisors featured heavily in the list of nominees and winners at the 2020 New Zealand Zone Two Musical Theatre Awards or “The Zonys”.

“The Zonys”, are a celebration of the best productions from theatre societies across the greater Waikato and Bay of Plenty regions and the awards were announced at an event in Rotorua on Saturday 7 November.

First-year Wintec Bachelor of Music and Performing Arts student, Memphis Ward won Best Leading Male in a Youth Production for his part in Musikmakers’ Madagascar Jnr., and the award was presented to him by his tutor, Kyle Chuen. 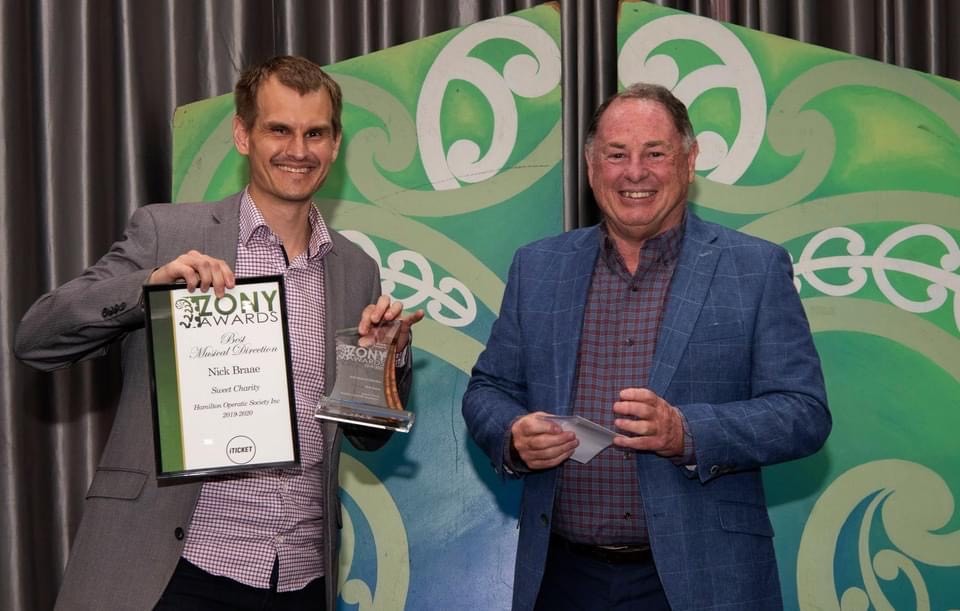 Two other Wintec School of Media Arts sponsored prizes went to soon-to-be-familiar faces. Jack Turner won Best Male Supporting Actor in a Youth Production, also for Madagascar Jnr., while the coveted Best Male Actor in a Musical went to Patrick Ward for his star turn as the lead role in Musikmakers’ Catch Me If You Can.

Turner and Ward have successfully auditioned for the Wintec Bachelor of Music and Performing Arts programme and will join Wintec to study the degree in February 2021.

Wintec Music and Performing Arts team manager, David Sidwell was nominated for Best Director, for the musical Sweet Charity. He may not have won on the night, but he is thrilled with the evening’s successes and says the Zonys help to solidify the strong and developing relationships between Wintec and the regional theatre community.

“These awards sponsored by Wintec focus on youth achievement, and we couldn’t be more pleased that some of the award winners are going to join our programme. The incoming class of 2021 is laden with talent and there will be some stars in that group.

Find out more about studying a Bachelor of Music and Performing Arts at Wintec.