I was having a conversation with a younger work colleague a few weeks ago determining what age we would want to be again if we could choose. We were trying to figure out what point in our sporting careers we would want to be transported back to. Having once been athletes we decided that 25 was the magic age. Young enough to be injury free, old enough to have banked 10 years of training and experience and smart enough to understand how the body best responded to the demands of high level sport. Sadly I will be turning 42 this year. 25 was some time ago.

Having grown up as an active busy kid; activity, exercise and sport were the norms in my life. Early morning swimming training, cold frosty rugby fields, foggy netball courts and jumping on the trampoline until it was dark are just some of the activities that I have vivid memories of growing up. Life was a big game and all the other stuff like school, family commitments and even eating fitted around this.

I was fortunate that as I grew from a teenager into a young adult I was able to continue my sporting pursuits. I was lucky that I arrived on the 1st class rugby scene just as the sport turned professional. The opportunity was provided to continue playing while getting paid to do so. Life was pretty good. The measures of success were calculated in kilograms, skinfolds, speed, endurance, tackles made and lineout throwing, to name only a few. I was a young man without children travelling to exciting new places, getting paid to play the sport I loved and focussed totally on my body’s health and performance.

However as the rugby administration told us it would continually throughout our careers, it all came to an end. At age 30 it was determined that I had sustained too many concussions and that any further damage to my brain may be permanent.

My thirties were not easy. While rugby had provided magnificent experiences it had come at the cost of putting other parts of life on hold. I spent my thirties trying to build a sustainable life. I was balancing the requirements of being a Dad, I was trying to reinvent myself, I was building a career, I continued my education engaged in post graduate business study, I started a small business, I built a house in the country to raise my kids, I began coaching rugby, I was planning for the future of my family, trying to be aware of the needs of my partner, attending to the immediate needs of my family and trying to deal with post-concussion syndrome. The balance was difficult to achieve and I did not get it all right. Retrospectively I would have done some things a lot differently.

The challenges of a normal life became apparent and time to focus on my physical health was minimal. The opportunity to grab small windows of time to exercise presented itself as ‘push chair runs’ whereby the double buggy was loaded with my twins when I got home from work in the evening and I’d head off on a run that could range from 30 minutes to 2 hours. After a couple of half marathons were completed my orthopaedic surgeon informed that he would not be operating on my busted ankle for a ninth time and that running was only going to speed up the degeneration of my body and exacerbate the injures that rugby had afforded me. That ended that activity.

There were some very important lessons learnt during this period. I learnt that in order for me to be the best version of myself I needed to revisit the disciplines of physical activity I had learned as an athlete. During the times when demands came from all directions and stress levels were excessive it was easy to start the day with a coffee, maintain energy with more coffee and end the day with a beer. Looking back on photos of this time I cringe at weight I was carrying in my gut and my face, the lack of condition and muscles in my body and the tired look on my face.

I eventually learned not to beat myself up about putting time aside to exercise. I knew I needed to exercise and that others also needed me to exercise so I could be a better person. Subsequently I did my best to schedule exercise into my day. It didn’t exercise every day but it did happen.

My career opportunities had started to evolve and I was required to perform at a higher level. It was necessary for me to be mentally sharp. Not easy having come from a background off multiple concussions! Exercise enabled me to maintain the ability to think quickly and with clarity for longer periods. I quickly developed the mantra ‘fit body, fit mind’ and became more mindful of the foods, drinks and behaviours that depleted energy and resulted in mental fatigue. I had known the process of developing new habits from sport and knew it wasn’t easy to create these. However through spending some time at the front end of the week preparing schedules, working out logistics and making good food easily accessible I gave myself a better chance of succeeding.

As my kids began to grow they involved themselves in activities such surfing, swimming, soccer, netball, rugby, basketball, cross-fit, cross country and triathlons. Being a little time poor I figured that a number of birds could be killed with the one stone if I joined in or coached the sports they liked. Their exercise became my exercise and was the source of a lot of enjoyment. As the kids have become a little older and a little more capable we now exercise together doing different activities such as biking the river trials, mountain bike and walk tracks and competitive small sided games.

As my daughters have improved and been selected in representative teams I have begun to attend representative trainings. This initially meant watching from the side-lines. The level of organisation is impressive within these sports and coaches and management are well prepared. Unfortunately the parents are left with the option to sit and watch or come back and pick the kids up once they are finished. I observed one of the parents doing yoga during the kid’s trainings. I quickly realised it was a good idea and put my exercise gear in the car. I was a little apprehensive to do yoga as the other parent seemed to be an expert but I did use the time to get a sweat up and get my lungs and body working.

I am 42 this year. I am currently the Centre Director for Sport Science and Human Performance at Wintec and continue to be involved in many sports at all levels. My twin girls will be 11 and my youngest 8. The challenge to find time to fit everything in continues as the as does the challenge to be the best version of myself. I am older, a little wiser, my body does not bounce back as easy after hard physical work and I get fat easier. I do know that a fit body helps achieve a fit mind and that the older I get the more deliberate I need to be in prioritising my health.

Tips for men to stay healthy as they age:
• Accept that life is demanding. As adults we have many pressures and expectations placed upon us every day. The time to focus on your own wellbeing can be used doing other things if exercise is not a priority.
• Do not beat yourself up about putting time aside to exercise. A healthier person is a contributor. Others benefit from your exercise.
• ‘Fit body, fit mind’. Exercise enables mental activity and capacity.
• Become more mindful of the foods, drinks and behaviours that depleted energy and result in mental and physical fatigue. Remove or change these things as you become aware of them.
• Create Habits. Spending some time at the front end of the week preparing schedules, working out logistics and making good food easily accessible. Give yourself a better chance of succeeding.
• Exercise when your kids exercise. Your kids exercise can become your own exercise. Coach their teams or join in their trainings when possible. Do alternative exercise in the same time period as your kids.
• Be deliberate and prioritise your health. 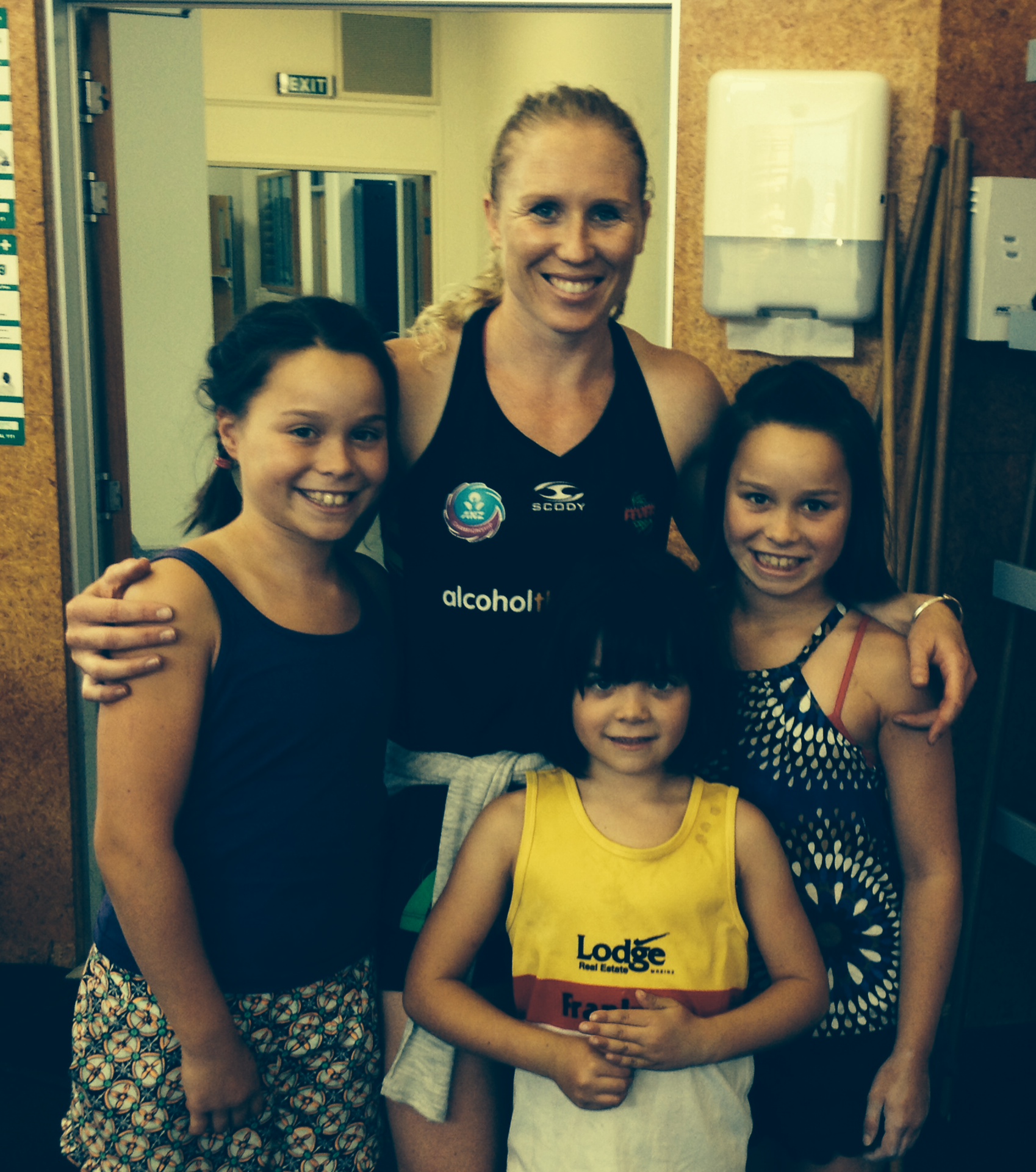 My daughters with their hero, netballer Laura Langman.

Greg Smith is the Centre Director of the Centre of Sport Science and Human Performance at Wintec.