The drug courts saved my life


The Auckland Alcohol and Other Drug Treatment Courts have saved an estimated $28.7 million in prison costs over a seven-year pilot and now there’s a call to bring this service to the Waikato.

The New Zealand Alcohol and Other Drug Treatment Court (AODTC) model replaces jail time with rehabilitation, supporting users who want to break their habit and the courts are reducing the number of people who are recycling through the prison system.

In January this year, the Aotearoa AODTC Conference in Auckland drew people from around the world and inspired a group from the Waikato to take action including Cassandra Cook.

An addictions practitioner, who teaches mental health and addiction support at Wintec’s Centre for Health and Social Practice, Cook is a strong advocate for bringing the AODTC model to the Waikato region.

“We need a better alternative for people in prison who experience addiction, these treatment courts work and thanks to the Auckland Courts, we know they work here in Aotearoa.

“We want to connect people with treatment, re-connect them with society and reduce reoffending. The Māori name of the AODTC is Te Whare Whakapiki Wairua, ‘The House that Uplifts the Spirit’; we want to bring this whare to the Waikato.”

She is one of the formation committee members of Waikato AODTC, a group founded this year for the purpose of bringing the courts to the region.

“Together we plan to raise awareness, garner public support and give this cause a voice.

“We’re hoping that by bringing these courts to the Waikato, we can achieve better results and impact on reoffending through courts that offer treatment and rehabilitation.”

At the conference, Cook says Ngāti Whātua iwi handed over the kaupapa (directive) from the Auckland Courts as an invitation for Waikato to support the establishment of an Alcohol and Other Drug Treatment Court. 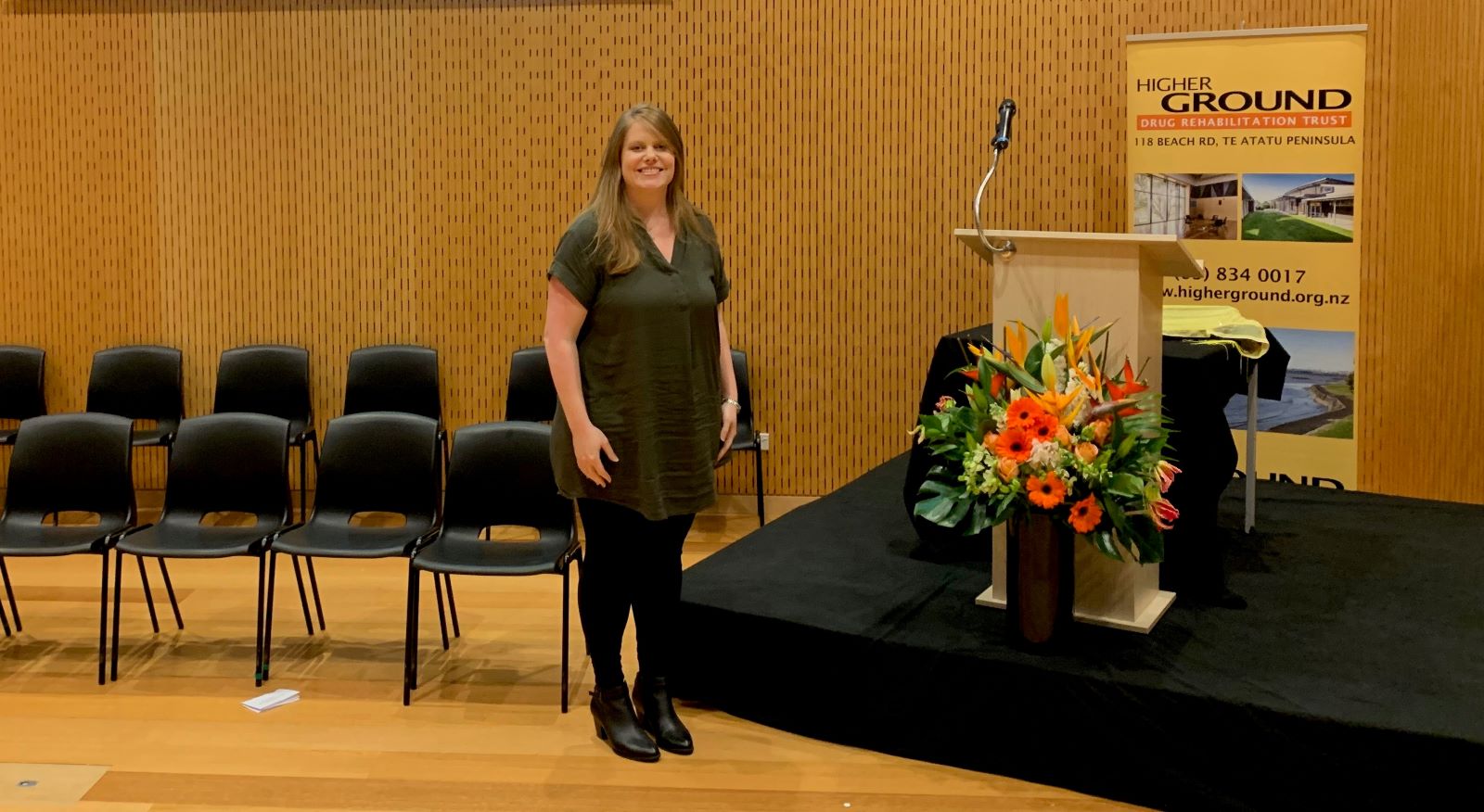 Wintec academic and Waikato AODTC member Cassandra Cook at a participants’ graduation at the Auckland Drug courts in September.

On Monday 14 October, Auckland judges from the Alcohol and Other Drug Treatment Court will join representatives from the Police, Corrections, Waikato District Health Board, treatment providers, community services, politicians and iwi for a free, public event, Break the Cycle of Alcohol and Drugs: Waikato AOD Treatment Court Hui at Wintec in Hamilton.

AODTC graduates will speak at the hui along with District Court Judge Lisa Tremewan, one of the founders of New Zealand's Alcohol and Other Drug Treatment Court.

Retired California Superior Court Judge, Peggy Hora who was instrumental in creating the drug court model, will be speaking via Skype during the conference.

Cook adds that the AODTC is the last chance for many of the people who enter it.

“Two-thirds of all inmates have substance problems. Eligible offenders in the AODTC are called participants. They are facing jail term of up to three years and their crimes are driven by their addiction.

“They have to pass frequent drug tests, and complete up to two years of rehabilitation, counselling and community work. Serious violent offenders cannot take part.”

The AODTC began as a five-year pilot, seven years ago. While beneficial, the Courts are expensive and there's still no permanent funding. Results published this year showed 450 offenders have been through the programme, 40 percent have graduated and around 60 percent of those have not reoffended.

Wintec student Nicola Belworthy thanks the drug courts for saving her life after experiencing their rehabilitation programme in 2015. Since then, her world has dramatically changed.

The 35-year-old is completing her NZ Certificate in Health and Wellbeing specialising in mental health and addiction support, and she wants to use her experience to support others.

Belworthy has 32 charges related to her addiction. They range from possession to fraud. Most were committed over a six-month period when she was fuelled by a combination of extreme trauma and an addiction to methamphetamine and other substances.

Her background tells a sobering story. Traumatic family events, abusive partners, unhealthy relationships that she says, “ranged from emotional abuse to physical hell” and a long-term addiction to drugs eventually threw her into turmoil.

“It was 2015 and I went on a rampage, my attitude was I don’t care who you are, I hated everyone, and I hated myself. I was abusive to my community and everyone around me. I turned into a monster and lost any ability to feel. I got involved with the wrong kind of people and went on a crime spree.

“Eventually I got arrested and the arresting officer asked ‘What happened to you? You’ve just lost yourself. You really deserve better than this’.

“I went to jail and got sober enough to think ‘what am I doing to myself?’

She says her lawyer Petrina Stokes changed her life.

“She said ‘you really need to change’. She introduced me to the drug courts. I was desperate to change, no more meth. From August 2015 until May 2017, they pulled me apart piece by piece and slowly put me back together. I did trauma counselling and intensive treatment to help me understand why I was being so disruptive. This gave me the tools I needed to help me live a normal, pro-social way of life.”

Nicola dealt with her issues but in the end, she didn’t complete her rehabilitation through the courts.

“In May 2017, I failed a drug test and because of this, I exited myself from the programme. I was then sentenced to two year’s prison for the crimes I committed from 2014 to 2015.

Seven months later, she was released from prison.

“I was also seven months pregnant with my first child. It was then, that I finally rehabilitated.

“I now want to show my daughter you can have a ‘shitty’ beginning but it doesn’t have to define who you are.”

She says something needs to give down here in Hamilton and with her insider’s view, she can help people.

“It’s my way of giving back.

“Life now, is amazing. I have not committed a crime or touched meth since January 2015. I live in Huntington, I have reconnected with my family. I’m active within the community and I have drug-free friends. I live a humble, normal life with good people around me.

“The drug courts saved my life and by helping me alone, they also saved thousands of dollars taken from the community by helping to stop my offending.

“The drug courts need to roll out nationwide. They saved my life and they can save many others. I don’t want people to think this will only benefit those with addictions. Families and the community will greatly benefit from this too.”

Supporters can also  sign a petition to encourage support for the Government to establish and fund a Alcohol and Other Drug Treatment Court in Hamilton.